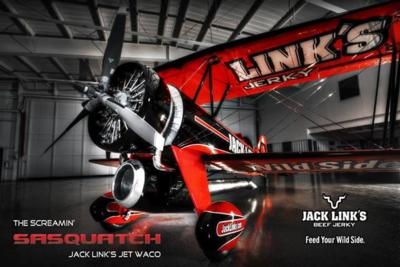 It looks a little bit like something we might have dreamed up and Photoshopped for the April 1 edition, but no, that’s really a Taperwing Waco with a jet engine bolted to its belly.

The “Screamin’ Sasquatch” was unveiled Monday night at the International Council of Air Shows in Las Vegas, giving air show industry insiders the opportunity to inspect it up close before it takes to the skies with John Klatt Airshows in 2014. The airplane, a Taperwing Waco made famous by barnstormers of the 1920s and ’30s, adds the modern twist of a jet engine that will thrill spectators with amazing sights and sounds.

John Klatt, a lieutenant colonel in the Air National Guard who fought in Operation Iraqi Freedom in Iraq, and Jeff Boerboon, a U.S. Unlimited Aerobatics champion, will pilot the “Screamin’ Sasquatch.”

For the complete story in Aero News Network, click here.