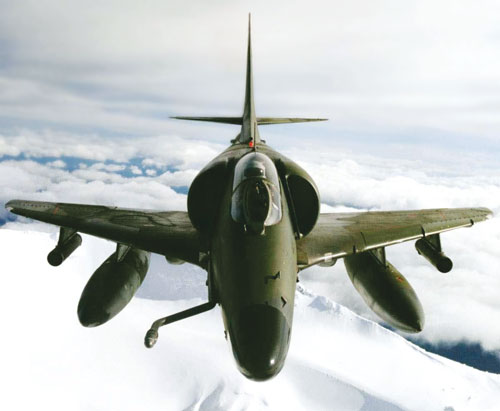 The last jet fighter to be operated by the Royal New Zealand Air Force (RNZAF), the McDonnell Douglas A4K Skyhawk, is set to become a museum piece. After a decade of repeated failed attempts to sell the mothballed fleet of 17 fighters, which were withdrawn from service in 2001, up to nine of the aircraft are to be offered to aviation museums throughout New Zealand and Australia.
Announcing the decision on April 6, New Zealand Defense Minister Wayne Mapp said that “the Government has made every effort to sell the Skyhawk fleet, but no acceptable offers have been received. We will therefore offer eight of them to qualifying public museums in New Zealand and one to Australia, for heritage and display purposes.”
Museums to get aircraft include the RNZAF Museum at Wigram (a single- and a two-seater), the Museum of Transport and Technology (MOTAT) at Auckland, the Omaka Aviation Heritage Centre in Blenheim and the Classic Flyers Museum at Tauranga. In addition one of the ex-Royal Australian Navy (RAN) Skyhawks that were sold to the RNZAF in 1984 will go the Royal Australian Navy’s Fleet Air Arm Museum at Nowra. Other museums are still being considered. It is likely that the remaining eight aircraft will be reduced to parts or broken up.
In 2001, New Zealand’s Clark Labor Government effectively scrapped the RNZAF’s fast jet combat aircraft fleet when it withdrew the 17 Skyhawks and 17 Aermacchi MB-339C from service and canceled a planned lease agreement with the U.S. for 28 F-16s. In 2005, the then New Zealand Defense Minister Mark Burton announced that all the Skyhawks and MB-339C aircraft had been sold to U.S.-based company Tactical Air Services for U.S. $110 million (approximately NZ $155 million). However, the sale failed to proceed, and other attempts to sell off the fleet failed.
New Zealand ordered the bulk of its A4 Skyhawks in 1969, with a major upgrade to avionics, including the APG-66 radar, in the ’80s. —Paul Hastings