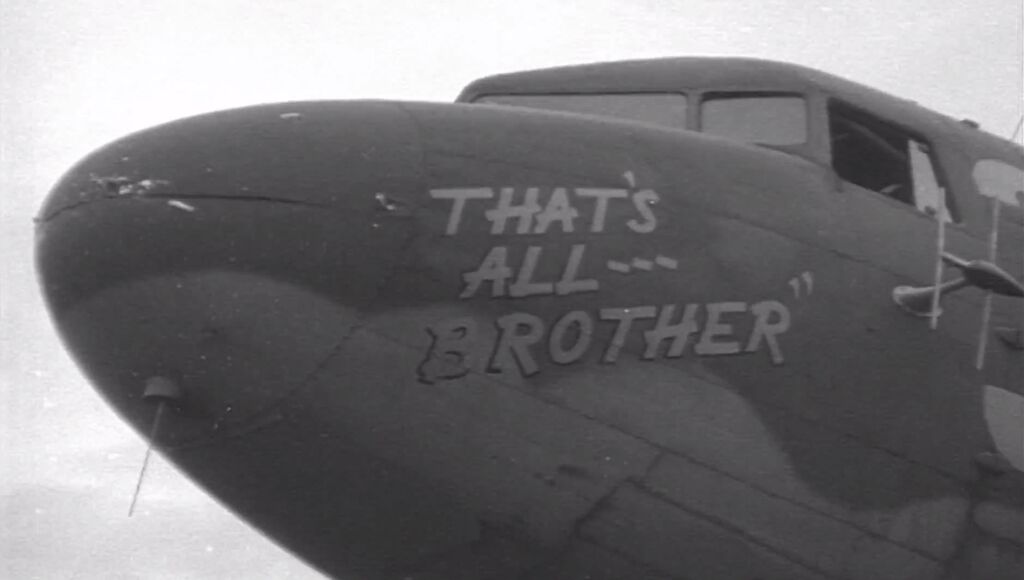 Story by the Commemorative Air Force

The transport aircraft that led the D-Day invasion of Normandy, France, more than 70 years ago has been rediscovered in an aircraft boneyard in Wisconsin. Believed lost to history, the airplane, a Douglas C-47, was slated to be cut apart and remanufactured as a modern turbo-prop. The Commemorative Air Force (CAF) is launching a Kickstarter funding campaign to save and restore the plane to flying condition.

Five hours before the D-Day beach landings began, “That’s All, Brother” led a formation of more than 800 aircraft that dropped 13,000 paratroopers behind enemy lines. Historic film, shot as the airplane departs on its D-Day mission, shows it was equipped with an early form of airborne radar to guide the invasion force to the drop zone. The aircraft was named “That’s All, Brother” as a personal message to Adolf Hitler that, with the Allied invasion of Europe, his plans were done.

CAF has negotiated for the opportunity to acquire “That’s All, Brother” from Basler Turbo Conversions of Oshkosh, Wis. The company had purchased the airframe to convert into a modern BT-67 turboprop and was unaware of its lineage until a researcher alerted them to its huge historical significance.

As part of the agreement the CAF must complete its purchase of “That’s All, Brother” by August 31. With the deadline approaching, the CAF has launched a Kickstarter campaign to raise the remaining funds to rescue this noteworthy aircraft.

“This is a modern miracle,” said CAF President-CEO Stephan C. Brown. “The aircraft was within weeks of being torn apart, when its serial number 42-92847 was traced and it turned out to be the actual lead aircraft for the D-Day invasion.”

After returning from the initial drop of 101st Airborne Division paratroopers on D-Day, “That’s All, Brother” towed a glider to Normandy, carrying essential supplies and men of the 82nd Airborne Division into the heart of the battle. The aircraft remained on combat status throughout the European campaign, participating in Operation Market Garden, the relief of Bastogne during the Battle of the Bulge, and the crossing of the Rhine River. After the war it passed through sixteen civilian owners and its story was forgotten.

The CAF plans to faithfully restore “That’s All, Brother” to airworthy condition, representing its exact configuration on D-Day. The airplane will be a “flying classroom”, allowing school children and other visitors to board the aircraft and sit in the original paratrooper seats. Inside the darkened plane, hidden speakers and sensors will carry people back in time to the night of June 5-6, 1944.

“We want to bring this world class artifact back to the public as part of the CAF’s mission to educate future generations about the legacy and values of those who fought for freedom in World War II,” Brown said.

The aircraft will be based in Dallas as an iconic centerpiece of CAF’s new national aviation museum attraction.  It will also be available to attend major national commemoration events, airshows and flyovers.  The CAF also plans to fly the aircraft to Europe in the summer of 2019 to participate in the 75th anniversary of D-Day, the last opportunity for living veterans to attend a major commemoration event.