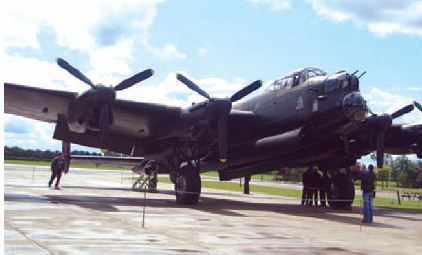 Two Avro Lancasters, from a total wartime production of 7,377, survive today in airworthy condition, one in the UK (RAF Battle of Britain Memorial Flight) and one in Canada (Canadian Warplane Heritage Museum at Mount Hope, Ontario). A 50 percent increase in the world’s airworthy Avro Lancaster population is on the cards. In the UK, where aircraft restoration projects seem not to daunt (take the Vulcan to the Skies project), the prospect of another Avro Lancaster joining the RAF’s example may become reality.

Eight Merlins in close formation would be awesome, but the hurdles to cross are also awesome, even though the Lancaster in question is currently taxiable and frequently does powered runs along the runway at East Kirkby in Lincolnshire, lifting its tailwheel off the ground but not its main wheels. Since 1988, it has been owned by farmer brothers Fred and Harold Panton, who also operate the Lincolnshire Aviation Heritage Centre at East Kirkby.

Avro 683 Lancaster B.VII NX611 was built by Austin Motors in Birmingham, UK in April 1945, one of 150 intended for 30 squadron’s Tiger Force in the Far East. Japan’s surrender meant that this aircraft went instead as part of a 54-aircraft order to the French Aeronavalé for maritime reconnaissance duties based in Brittany and Morocco. In November 1962, it was one of three Lancasters ferried to Noumea in French-owned New Caledonia in the Pacific for maritime surveillance. Replaced by DC-4s, the Lancaster was to be scrapped at Noumea, but Malcolm D.N.Fisher and his UK-based Historical Aircraft Preservation Society (HAPS) made a successful bid for the aircraft in 1964. The French flew it to Sydney, Australia and then HAPS had to fly it “home” to the UK. Civilian registered as G-ASXX for its ferry flight, it arrived back at Biggin Hill in the UK from Australia on May 13, 1965, wearing its all-white Aeronavalé scheme.

Its last flight was on June 26, 1970 when it arrived at Blackpool, UK. The owners loaned the aircraft to the RAF for gate-guard duties at RAF Scampton and, in August 1973, it was roaded there and stayed until April 1988, when the Panton brothers bought it and roaded it to East Kirkby. It is now finished in appropriate colors as Just Jane and as NX611 as a tribute to their brother who was killed while serving with RAF Bomber Command.

Earlier this year (2011), Fred Panton said, “We are putting plans in place to accumulate enough spares and develop an engineering program to get our WW II bomber airworthy. We are sourcing four airworthy engines, acquiring parts from all over the world, assembling the relevant paperwork and much more; our aim is to let the Lanc feel air under her wheels once more. No move will be made until we are happy that we have built up enough parts and solved all the logistics issues.” The Panton family will fund this restoration, but when it will fly will depend on many factors.    —Geoff Jones