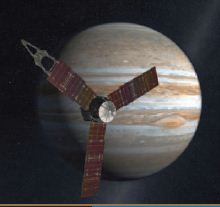 After a successful launch from Cape Canaveral Air Force Station in Florida, the NASA spacecraft Juno is safely on its way to the planet Jupiter. To get into space, the large and heavy spacecraft was launched atop an Atlas V-551 rocket at 12:25 p.m. local time on August 5, 2011. The journey is to take five years, with Juno arriving at Jupiter in July of 2016. It is to complete 32 highly elliptical polar orbits by October 2017, when it is scheduled to make a de-orbit burn to intentionally crash into the largest planet in the solar system.
With its suite of scientific instruments, Juno will investigate the existence of a solid planetary core, map Jupiter’s intense magnetic field, measure the amount of water and ammonia within its deep atmosphere, and observe the planet’s auroras that are caused by its magnetic field. The Juno mission is the second spacecraft designed under NASA’s New Frontiers Program. The first was the Pluto New Horizons mission, launched in January 2006 and scheduled to reach Pluto’s moon Charon in 2015. Juno’s scientific payload includes a gravity/radio science system; a six-wavelength microwave radiometer; a vector magnetometer, plasma and energetic particle deflectors; a radio/plasma waves experiment; an ultraviolet imager/spectrometer; and an infrared imager/spectrometer. Juno also carries a high-definition color camera to provide detailed images of Jupiter’s poles.