Propeller-driven aircraft engaging jet fighters in combat seems highly unlikely, but is surprisingly more common in the history of aerial warfare than one would think. With the dawn of the jet age in the waning days of World War Two and its rapid expansion throughout the Cold War, prop and jet fighters experienced a substantial overlap. A cataloguing of each individual engagement would be too cumbersome, but an overview of this unique aspect of warfare reveals some truly hair-raising moments on behalf of the airmen locked in battle. Though less likely, the dueling of dissimilar-powered aircraft still has the potential of erupting in future conflict.

World War II
Though several of the primary belligerents of WWII had jet-powered aircraft in development—most notably the British Gloster Meteor and American Lockheed P-80 Shooting Star—it was the Luftwaffe to deploy the first one. Tested as early as 1941 and fielded in 1944, the Messerschmitt Me-262 Schwalbe (Swallow) rocked the foundations of aerial warfare of the era. With a top speed of 560 mph, 37,000-foot ceiling, formidable armament of four 30mm cannons, and of course it’s two Junkers turbojet engines, the Me-262 was unmatched in the skies above Europe. It was a menace to allied air power and feared by American and British bomber crews. The idea of a jet aircraft was so new—in combat, no less—that it allowed the quote of infamous American aviator Chuck Yeager, “The first time I ever saw a jet, I shot it down,” to be uttered (1).

One of the most common fighter foes faced by the 262 was the North American P-51 Mustang. Though allied kill scores—specifically against Me-262s—are high, these figures are somewhat misleading due to the fact that several European Theater air groups included aircraft destroyed on the ground as kills. Furthermore, by the time the 262 was fielded, overwhelming allied air superiority made its deployment difficult; most of the German jet fighters that were shot down by American P-51s were done so while they were either landing or taking off from their bases. However, while actually engaged in aerial combat, the 262 performed rather well. Unable to catch it at high speeds, escort P-51s were routinely caught off guard as 262s sliced through allied bomber formations. In the last months of the war, staggeringly outnumbered 262 squadrons engaged 1,500 plane armadas, still managing to achieve positive kill ratios (2). 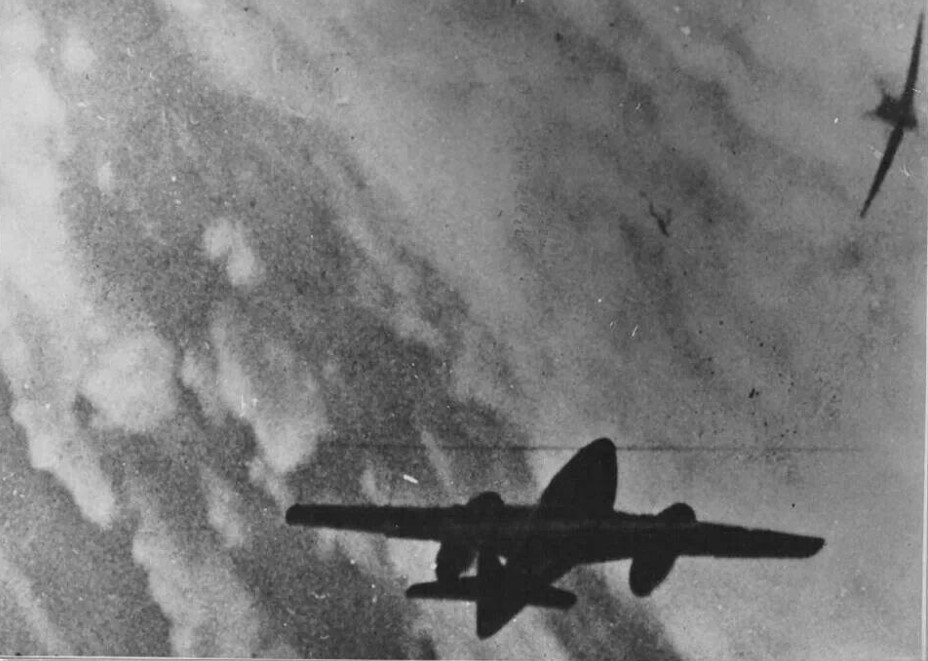 Gun camera footage of an Me-262 tangling with an allied piston-engine fighter.

However, the cutting-edge jet fighter was too little too late. By the time of its combat debut, the tide had been irreversibly changed for the German military; aircraft and war-production factories were being pulverized by the allied strategic bombing campaign and there simply weren’t enough 262’s to impact the course of the war.

Korea
The Korean War was the first major conflict of the Cold War, and it was fought with a substantial amount of WWII-era weaponry, including aircraft. This was due to the relatively short amount of time that lapsed between the two conflicts, as well as the massive military drawdown that occurred after 1945. As the United States attempted to get back to it’s pre-war, quasi-isolationist way of life, less funding and manpower were allocated to the development of new weaponry; this became glaringly obvious as Mikoyan-Gurevich MiG-15s swept down the Korean Peninsula as the conflict continued to escalate. Only the North American F-85 Sabre was capable of going toe-to-toe with the MiG, relegating all piston-engine fighter aircraft to ground attack roles. 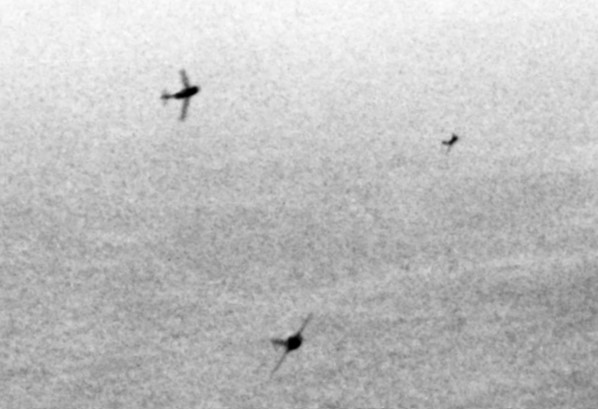 In an image reminiscent of WWII, MiG-15s turn in formation as they prepare to engage allied bombers; in this case, B-29 Superfortresses. The jet age made the concept of large bomber armadas executing daylight missions untenable.

Though the three years of the Korean War are rife with jets shooting down propeller aircraft, there are far fewer instances of the situation being reversed. One of the most famous examples was on 9 August 1952 when a flight of Fleet Air Arm Hawker Sea Furies tangled with MiG-15s on their way back to their ship. Though credit has been long-misallocated, a single MiG was shot down that day by Sub-Lieutenant Brian “Schmoo” Ellis. This engagement shows that while jet aircraft were superior in almost all facets of aerial combat, when mishandled by the pilot, they could become very susceptible to more maneuverable piston-engine aircraft. “Schmoo” recounts,

The MiG came in from behind and realised that he had too much energy; he was going too fast. He put out his air brakes too slow but in doing so loss momentum and dropped into my gyro gunsight. I fired and even as he accelerated away, I kept firing. I had no time to watch him go down as there was still a fight underway (3).

With the introduction of jet fighters on a large scale, it seemed as if the days of piston-engine fighter aircraft were over. As mentioned above, the superior speed and performance of jets had permanently relegated prop fighters to ground attack roles; but as Sub-Lieutenant Ellis’ flight alluded to, seemingly antiquated aircraft were still a force to be reckoned with in war-torn skies.

Vietnam
Propeller aircraft continued to serve in the ground attack roll throughout the Vietnam War. One of the most heavily utilized airframes was the Douglas A-1 Skyraider. Originally developed during WWII, the Skyraider would not roll off the assembly line before wars’ end. However, it saw service in Korea with the Navy and Marine Corps, and by the time of conflict in Southeast Asia, it was still in service on the decks of aircraft carriers.

Similar to the Korean War, the Vietnam conflict saw a very mixed array of aircraft in the sky. It was almost inevitable for legacy piston-engine aircraft to encounter jets. Relatively early into the war, Navy A-1s flying from the USS Midway (CVA-41) encountered North Vietnamese MiG-17s. On 20 June 1965, VA-25 “Fist of the Fleet” Skyraiders were covering a rescue mission when NVAF MiGs abruptly appeared from the north and fired on the slow-moving A-1s. Though faster, one of the enemy pilots made the same mistake as the MiG-15 in Korea against the Sea Furies and attempted to engage slower, more maneuverable propeller aircraft in a turning engagement. Piloted by Lieutenants Charles Hartmann III and Clinton Johnson, the two Skyraiders were able to maneuver their aircraft into a position where they bared their guns down on one of the MiGs as it came in for a second pass and sent it plummeting to the earth in a joint kill (4).

Barely a year later, four more A-1s from the USS Intrepid (CV-11), also supporting a rescue mission, encountered NVAF MiG 17s. The engagement culminated in Lieutenant Junior Grade William Thomas Patton scoring a kill. Recounting the fight, author Dario Leone states, “Having the advantage, Patton waited for the MiG to fill his gunsight and, in what he describes as the most exciting moment of his life, poured cannon fire into the MiG’s tailpipe. With both aircraft at a 75-degree upward angle, he closed to within 100 feet (close enough to watch the MiG’s tail disintegrate) when all four guns quit—two were empty and two, he learned later, had jammed (5).”

Patton followed the burning MiG through the clouds and watched the pilot eject. The helicopter assigned to the rescue mission witnessed the engagement, thus confirming the kill. 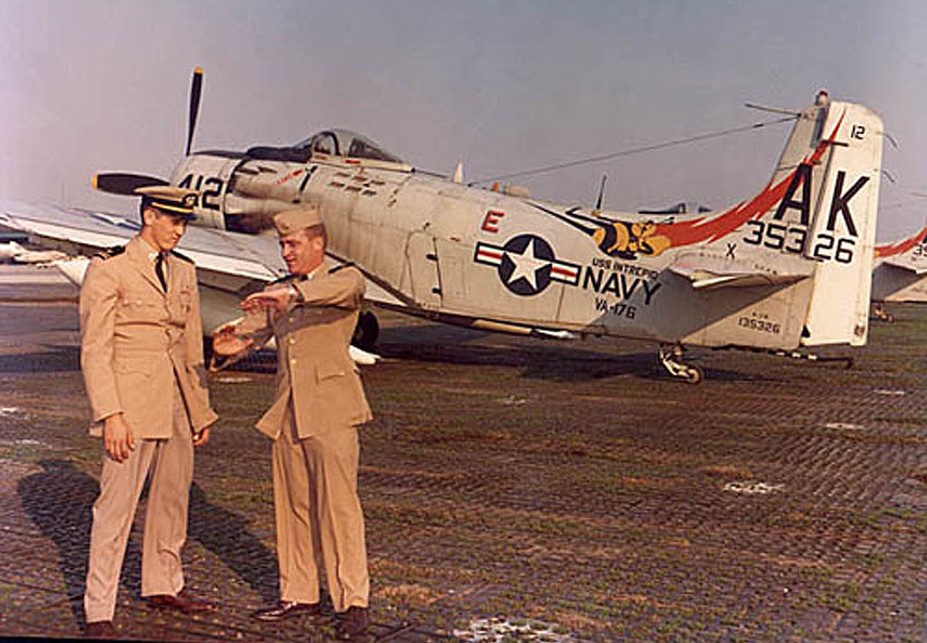 Lieutenant Junior Grade William Thomas Patton recounts his MiG kill with his wingman in front of his Skyraider.

Future Conflict
The concept of prop and jet aircraft engaging in aerial warfare in the future seems unlikely. With the advent and proliferation of unmanned aerial vehicles, less propellor driven aircraft, and a general drift toward more unconventional and asymmetric forms of warfare, the notion of air-to-air engagements—specifically dissimilarly powered ones—is improbable.

However, in 2019, the Air Force decided to field two new-build propeller-driven aircraft: Sierra Nevada-Embraer A-29 Super Tucanos and Textron AT-6 Wolverines. Sold to foreign allied militaries, their intent is to be flown in a role similar to the close air support missions already discussed in the conflicts mentioned above.

After twenty years of war against non-uniformed combatants in the Middle East, the need for multi-million-dollar 4th and 5th generation fighters in an unopposed air environment makes less sense. Aircraft that are lighter, cheaper, and are still capable of carrying a similar payload with a decent loiter time again become relevant. With this idea in mind, future conflict with a near-peer threat again has the potential for dissimilar aircraft again sharing contested airspace.–By A. T. Roberts