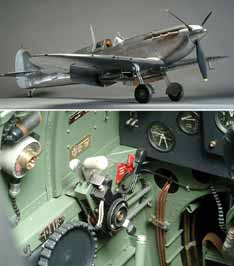 David Glen’s Unreal Spitfire Mk.I
‘If anyone asked me why I set to build a Spitfire in one-fifth scale, and detailed to the last rivet and fastener, I would probably be hard-pushed for a practical or even sensible answer. Perhaps the closest I can get is that since a small child I have been awe inspired by R. J. Mitchell’s elliptical winged masterpiece, and that to build a small replica is the closest I will ever aspire to possession.’And so begins David Glen’s tale of his eleven year odyssey to build what has to be the most perfectly detailed model of Reginald Mitchell’s legendary design that the world has ever seen.

It is tempting to call Glen’s creation a model airplane, but to do so would be to trivialize a monumental project. Close examination, for instance, shows that the rivets are actually rivets, not simply marks on the aluminum skin. Although Glen didn’t keep an accurate count, he estimates he had to make and drive something around 19,000 rivets.

The cockpit would make any Battle of Britain pilot feel right at home, as nothing has been glossed over or ‘hinted’ at, meaning even the instruments have actually hands and glass lenses rather than simply painted. Each bolt and nut is a real nut and bolt only many times smaller than the original.

The magnificent artifact is approximately four feet long and will occupy a place of honor in the Royal Air Force Museum in England.

For more photos and details of the construction see hsfeatures.com