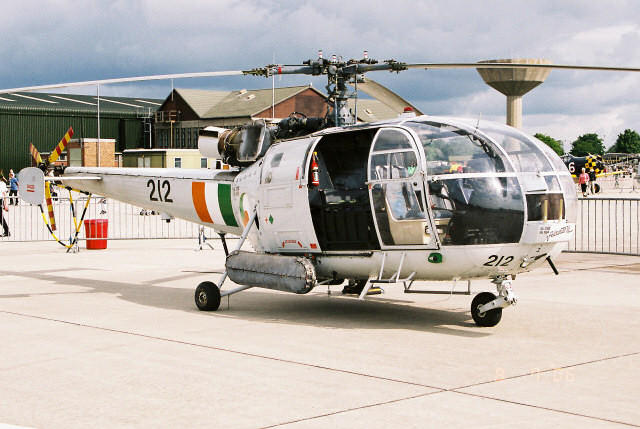 The Irish Air Corps celebrated the 50th anniversary of helicopter aviation on Tuesday. The pioneering pilots of the Air Corps introduced rotary aviation to Ireland when they flew two Alouette III helicopters from France to Ireland, landing in Casement Aerodrome, Baldonnel, on Nov. 26, 1963.

The arrival of these helicopters, callsigns “A195” and “A196,'” signaled the establishment of helicopter flight and committed the Air Corps to the development of a national daytime search and rescue (SAR) for the state.  This new tasking saw the Air Corps complete its first SAR mission on the Dec. 23, 1963, only three weeks after the service had gone operational, with the first air ambulance flown in February 1964.

Since these first life-saving missions the Helicopter Wing, now called No. 3 Operations Wing, have performed more than 2,300 SAR missions and 4,000 air ambulances, saving countless lives. This has led to the wing being the most decorated unit in the Defence Forces, with 22 Distinguished Service Medals, 12 Department of Marine Meritorious Medals, as well as two coveted French Federation Aeronautique Internationale “Diplome D’Honneur” for humanitarian service and the Irish Air line Pilots Association “Fitzmaurice” award for services to Irish aviation.