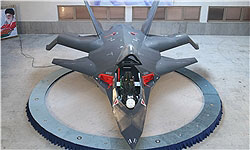 Iran today unveiled a new indigenous fighter jet, which is said to be similar to a U.S.-made warplane.
The Qaher-313 (Conqueror-313) advanced military aircraft was put on display during a ceremony on Saturday in the presence of the Commander of Iran’s Army Major General Ataollah Salehi, Defense Minister Brigadier General Ahmad Vahidi and Commander of the Islamic Republic of Iran Air Force (IRIAF) Brigadier General Hassan Shah-Safi on the occasion of the Ten-Day Dawn celebrations commemorating the victory of 1979 Islamic Revolution.

Iranian President Mahmoud Ahmadinejad, who addressed the unveiling ceremony, reiterated that Iran’s defense might did not serve purposes of “expansionism and aggression against other countries” and that it was “deterrent” by nature.

Ahmadinejad also stated that the fighter jet had been completely designed and manufactured by Iranian experts.

For the complete story by Iran’s PressTV, click here.