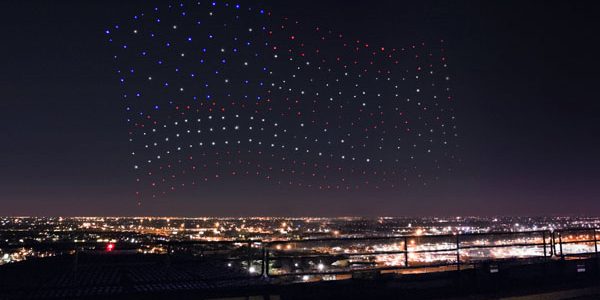 In a choreographed aerial light show to kick-off the performance of Lady Gaga’s half-time show, Intel’s Shooting Star drones lit up the sky during the Super Bowl. (All images courtesy of Intel) Here are some interesting facts about the show: The software and animation interface on the Intel Shooting Star drone system allows a light show to be created in a matter of days or weeks depending on the animation complexity. Intel’s proprietary Algorithms automate the animation creation process by using a reference image, quickly calculating the number of drones needed, determining where drones should be placed, and formulating the fastest path to create the image in the sky.

The light show software also runs a complete fleet check prior to each flight and is able to select the most optimized drones for each flight based on battery life, GPS reception and more. The fleet size is dependent on the animation needed and can range from hundreds of Intel Shooting Star drones or even more in the future. The first-of-its-kind Shooting Star drone meets all FCC technical specifications, but has not yet been authorized as required by the rules of the Federal Communications Commission.