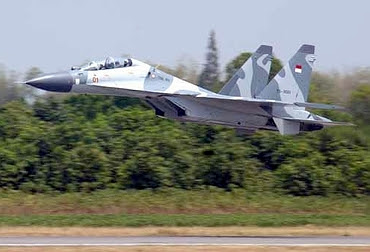 Indonesia has received the last delivery of Sukhoi fighter jets it ordered from a Russian producer, thus turning its Sukhoi Flanker air superiority fighter fleet into one full squadron.

The delivery of the last two Sukhoi Su-30 MK2 jets took place on Wednesday in Indonesian air forces base of Hasanuddin, located in the capital city of South Sulawesi province, Makassar, where the air forces’ 11th Squadron, Wing 5, is based. Those two fighters were delivered in unassembled forms, transported by an Antonov 124-100 transport plane from the Russian city of Khabarovsk, which made a stopover in the Philippines’ Ninoy Aquino Manila airport.

With the last delivery of the Su-30 MK2, Indonesia now has one full squadron of air superiority fighters that consists of 16 Su-27 SKM and Su-30 MK2s.

For the complete story by by Abu Hanifah of Xinhua (China) News Agency, click here.