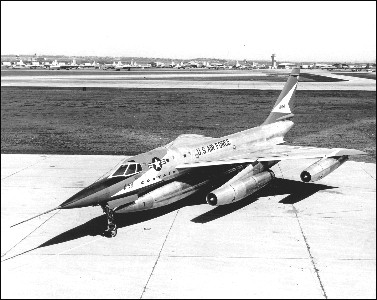 A Miami County, Ind., U.S. Air Force pilot became an overnight celebrity 50 years ago today after he flew a supersonic bomber jet on a record-shattering flight from Tokyo to London that captured the attention of the world.

Sidney J. Kubesch, a Texas native who ended up moving to Miami County after marrying a Peru woman, completed the 8,028-mile trip in a Convair B-58 Hustler nicknamed “Greased Lightning” in 8 hours, 35 minutes, at an average speed of 938 miles an hour. It was the longest supersonic flight in history. It still holds that record.

Although the bomber had to slow down five times for in-flight refueling during its dash halfway around the world, it still managed to halve the previous west-to-east record of 17 hours, 42 minutes set by a British Canberra jet in 1955. Kubesch, who’s now 83 years old and farmed in the county for decades after retiring from the Air Force, made the flight with two other crew members on Oct. 16, 1963.

For the complete story by Carson Gerber of the Kokomo (Ind.) Tribune, click here.