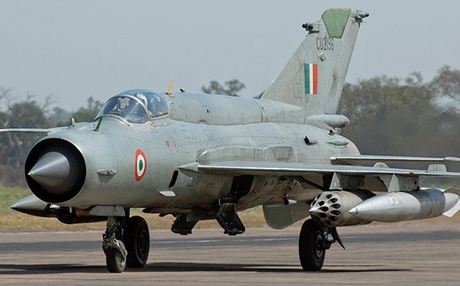 The Mikoyan-Gurevich MiG-21FL fighter jet aircraft, which had heralded the “supersonic era” in the Indian Air Force and had changed the course of the 1971 Indo-Pak war due to its accurate targeting ability, flew into the annals of history today.

“I have the greatest professional regard for MiG-21. The agility of MiG-21 cannot be matched by any of the present day fighters,” IAF Chief N.A.K. Browne said after bidding adieu to one of the first variants of MiG-21 combat aircraft, which dealt severe blows to Pakistan air force in the 1971 Bangladesh war.

At the Kalaikunda airbase in West Midnapore district Flight Lt. L. Nagarajan, the youngest Operational Conversion Unit pilot, handed over form 700 (document log of an aircraft) of MIG-21FL to the air chief, symbolically drawing curtains on one of the most enduring sagas in IAF aviation history.