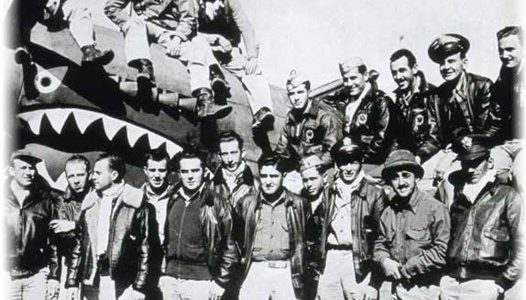 My dad, Lt. Col. Grover F. Nelson (Ret), was stationed in far North East India at the Allied Airbase at Chabua near Assam with the U.S. Army-Air Force during World War II flying supply routes between India, Nepal, Burma and China. At the end of the war, he was 29-year-years old.

He was one of the legendary “Flying Tigers” flying C-47s, P-40s and P-38 Lightning bombers — in defense of China. My dad was not among the first wave of volunteer pilots on a secret mission before Pearl Harbor authorized by President Roosevelt, who the media later nicknamed the “Flying Tigers.” He was in the second wave that arrived from mid-to-late 1942. I remember him telling me about flying ‘Over the Hump’ past Mt. Everest in the Himalayan Mountains. 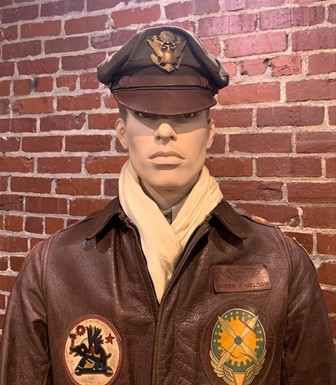 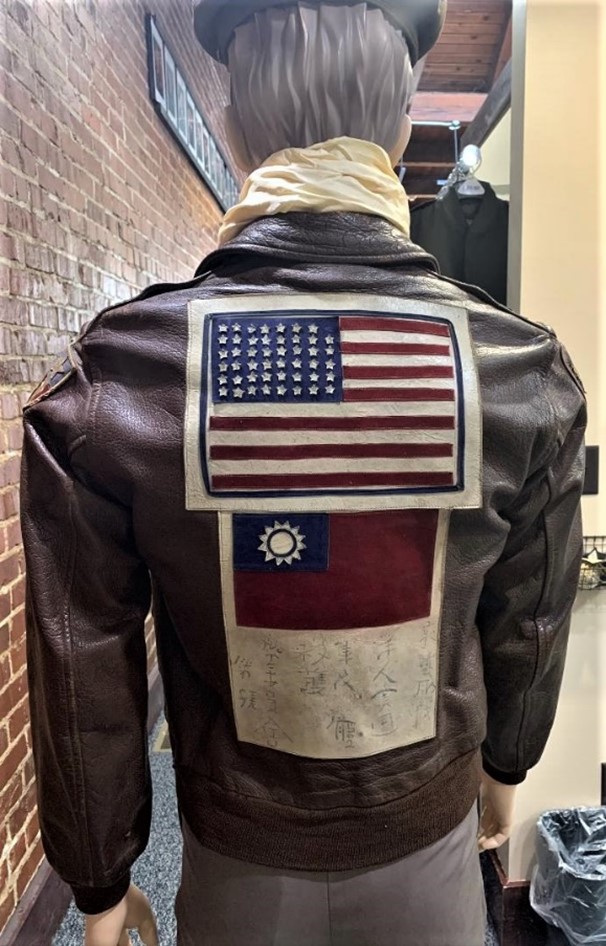 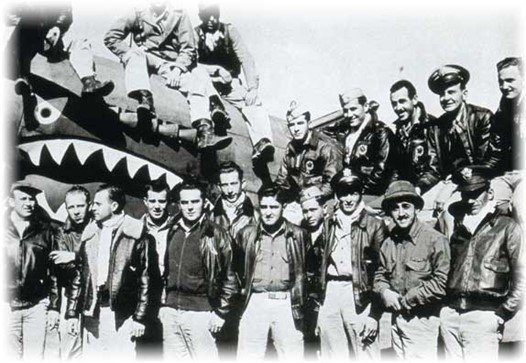 Capt. Grover Nelson is in the front row, far right

During these years 1942 to 1945, my dad and his crew by mid-1943 somehow managed to rebuild their own, fully-functional C-47 (AKA as a DC-3) from a boneyard full of salvaged, wrecked airplanes and parts. This C-47 was officially off the books. None of the serial numbers matched. But little did they know this airplane would later set them free.

During infrequent times off, my dad told me of flying off with his crew — in their personal C-47 — to see the Taj Mahal in Agra, India. He said it was the most magnificent building he’d ever seen. While in the air over the Taj Mahal, my dad did not land but instead circled the centuries old building numerous times and buzzed it several times before heading back to base. At times, my dad was a bit of a showoff.

World War II ended in Europe May 7, 1945 when Nazi Germany surrendered, Japan fought on until Sept. 2, 1945 after those surprise A-Bombs went off.

My dad and his crew were having a hard time figuring out how to get home to the USA. All of a sudden — hundreds-of-thousands of American soldiers, airmen and related personnel in Europe, Africa, the Mid-East, the Far-East, India and the South Pacific — were scrambling for any way possible to get back to the USA.

My father and his men all just looked at each other. They knew they would be last to be evacuated so they said to each other, “We could be sitting around here for months. F… it! Let’s go now!” and “We have that airplane. It looks like hell, but it’s 100% flight ready” and “The war is over. It’s time to go home.”

Once they made the unanimous decision to leave, they were like a batch of stirred up hornets packing up gear, thinking of last-minute things – food & drinks. One of dad’s crew, nicknamed Chewy, managed to locate two older British-made, belt-fed Vickers Machine Guns with tall tripods and he mounted them inside the C-47 within hours converting it to a mini-gunship. The Vickers fires .303-caliber shell cartridges at 450 Rounds-Per-Minute with an effective range of about 6,600 feet. On one occasion these weapons were a life-saver.

My dad and his crew were heavily armed with sidearms, M-1 Garand rifles and .30-caliber auto-fire M-1 Carbines with 30-round banana clips.

My dad’s co-pilot ‘Pappy’ decided on his own that this C-47 needed a name. So, he climbed a ladder and painted below the exterior pilot’s window – ‘Freida Mae.’

Chewy, AKA Dalton Smith, brought his cute girlfriend along named Jackie who worked in the base kitchen and her best friend Lauren who both joined the U.S. Army together from a small town in Ohio and ended up in NE India. My dad and Chewy met in late 1941 during flight school at Randolph Field near San Antonio, Texas. Dad, a First Lieutenant, was in flight training while Chewy was in mechanic’s school. It was a pure stroke of fate that my dad and Chewy ended up in NE India together. Chewy got his nickname due to constantly chewing bubble gum or tobacco with a spit can. He was an Oklahoma farm boy who grew up working on John Deere farm tractors, plows and bushhogs.

My dad told Jackie and Lauren to stay quiet, pay attention and do what you are told.  They were taught how to belt-feed the Vickers.

Without drawing attention to themselves that ‘ratty’ C-47 was towed out of a hanger by a tractor to the fuel pumps for a fill up. Nothing out of the ordinary. They told no one about leaving. My dad, his crew and those two girls just disappeared. Poof – gone like a cloud.

So — without options, they fired up that Phoenix of a C-47 and took off tipping its wings left & right in respect saying goodbye to those left behind.

My dad was flying by the seat of his pants – airborne day into night using only a compass and a map to steer this ‘patchwork’ C-47 heading south east out of India, across the Bay of Bengal and the Indian Ocean, across the jungles of Malaysia and Indonesia, then further south east to Darwin, Australia. They were constantly in and out of bad weather, lightning, thunder and rough air.

Somewhere in between Malaysia and Indonesia, flying low at night without running lights under a bright full moon maintaining radio silence, another aircraft was slowing approaching from behind making no attempt to contact this C-47 on radio.  It was spotted by Chewy manning those vicious Vickers Machine Guns, who went to the front and told the pilot, who thought about it as it closed in. My dad decided to make a sharp 90-degree turn, but this mysterious airplane followed this C-47 apparently tracking them on radar, but why? It didn’t matter who they were or why they were there. “Try to shoot it down Chewy,” ordered the pilot.

Using only one of the Vickers, the pilot maneuvered the C-47 in position to fire. When that brutal machine gun went off ‘bam-bam-bam-bam-bam-bam-bam’ at 7-rounds-per-second with heavy smoke both Jackie and Lauren screamed in sheer terror as Chewy told them to “Focus … get a grip.” Sure enough those girls were feeding the cartridge belts into that hungry Vickers one after another just like Chewy taught them.

Whoever or whatever was following them burst into flames and crashed into the sea. When the shooting stopped, Jackie and Lauren fell backwards against the fuselage shellshocked — shaking, trembling and sweatin’ bullets. Chewy took that bourbon bottle up to the pilot as they shared a drink while my father smoked his cherry-tobacco-filled pipe. My dad and Chewy just looked at each other shaking their heads as they kept flying south east.

My father and his crew never learned who it was. Nobody inquired about it and they did not report it. Don’t ask, don’t tell. This incident was one of those ‘Secrets of War.’

Guided by faith somehow, someway they made it through this 4,000-mile flight in that ‘Rag Tag’ C-47. I just can’t imagine doing that during that perilous time with gas stops, paying cash, language barriers, danger everywhere, etc., but they did it. My dad was one helleva badass. He loved his crew. They all made it out together plus those two girls.

Soon after takeoff, my dad said this to his co-pilot Pappy, crew and the two women passengers, “As your commanding officer, I got ya’ll into this and I’ll get you out. We can do this. With Pappy at my side, we will fly the whole way. If I take care of myself first, then all of us will get outta here OK. Would somebody make me a sandwich and find that Kentucky bourbon? Please!”

I wonder what they all talked about during that 2-day flight. Probably mom’s home cooking, wives and girlfriends, hopes and dreams, telling dirty jokes, family stuff, bombing Japan and getting rid of Hitler, their other commanding officers they didn’t like and on and on plus friends they lost in India. Many C-47s were shot from the skies by Japanese fighter planes. Many of these pilots and crews were never recovered from the Himalayan Mountains. They were listed as Missing-In-Action (MIA). One thing they didn’t talk about was downing that airplane.

According to C-47 stats, the cruising speed is about 160 MPH with a standard range of 1,600 miles. That’s 25-30 hours of flight time for a 4,000-mile journey given all the variables. I remember dad telling me they did not stop to rest, only for gas, all the way to Darwin.

The first gas stop — before heading out over the vast Indian Ocean — was in Calcutta, not far from Bangladesh. Then came Kuala Lampur, Malaysia followed by Jakarta, Indonesia before Darwin. At all three airports my dad and his crew were treated like heroes being given free gas and whatever else they needed before taking off again. I remember my dad telling me that he got teary eyed by their spontaneous receptions. Giving thanks to them for eliminating the threat of Imperial Japan from this tropical region in the South Pacific.

At the Darwin Airport AKA Parap Airfield, they sadly ditched the stolen C-47 as ‘spoils of war’ for the Royal Australian Air Force. However, this rebel C-47 had no papers. Tracing the serial numbers would only lead to reports of crashed C-47’s that were signed off as ‘totaled out’ on paper. If anyone owned this C-47 it was that US Army-Airforce boneyard back at the Allied Base.

Somehow, they talked their way onto an ocean-going freighter/tanker headed for Hawaii first then San Diego, California. (I like to think they traded the airplane for a free ride home.) The trip took about two weeks with rough seas and huge waves battering the ship day and night. This ‘free’ ride was no cake walk.

In San Diego – dad, his crew plus Jackie and Lauren split up hopping aboard military flights that would eventually take them all home. Both girls went home with Chewy to Oklahoma to start a new life.

For my father that meant Syracuse, New York where my mother – Freida Mae Lewis Nelson — was waiting for his return to 1428 West Colvin Street. These brave and courageous war-torn shattered lives had to be made whole once more. When my dad arrived home, there was a Western Union telegraph waiting for him. He opened it and learned he had been promoted to the rank of ‘Major.’ I suppose stealing that C-47 either didn’t matter, or they didn’t know about it, or they didn’t care or they loved how he and crew escaped India. We will never know.

What my father and his crew did is how stories of ‘Legends’ are born.

My dad never did see any of his crew again, however some of them talked on the phone from time-to-time.

Former Secretary-of-State Dean Rusk — who during World War II served under U.S. Army Gen. Joseph W. Stilwell as his deputy chief-of-staff for the China-Burma-India theater — recommended to President Eisenhower my father for a job in Washington, D.C. for the U.S. Navy’s Facilities Engineering Command, under who’s vast authority came maintenance and development of grounds for the White House, Camp David in Maryland and privately owned presidential estates such as in Gettysburg, Pa., Hyannis Port, Mass., and the LBJ Ranch in Texas. My dad retired in 1977 and moved to Harlan, Kentucky, where he and my mom bought a huge Victorian Manor Home built in 1903 that my mother grew up in as a child.

So, for my dad being a badass and swiping that C-47 from India really wasn’t such a bad way to fly.

Decades later when my parents were in an assisted-living center in Longwood, Florida in 1990, I remember my mom telling me dad was balling his eyes out when he got word that ‘Pappy’ his co-pilot had passed away. My father crossed the rainbow bridge on Jan. 31, 1995 in Longwood. He was 78. 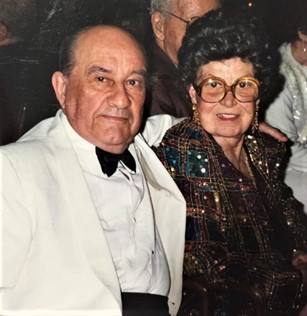