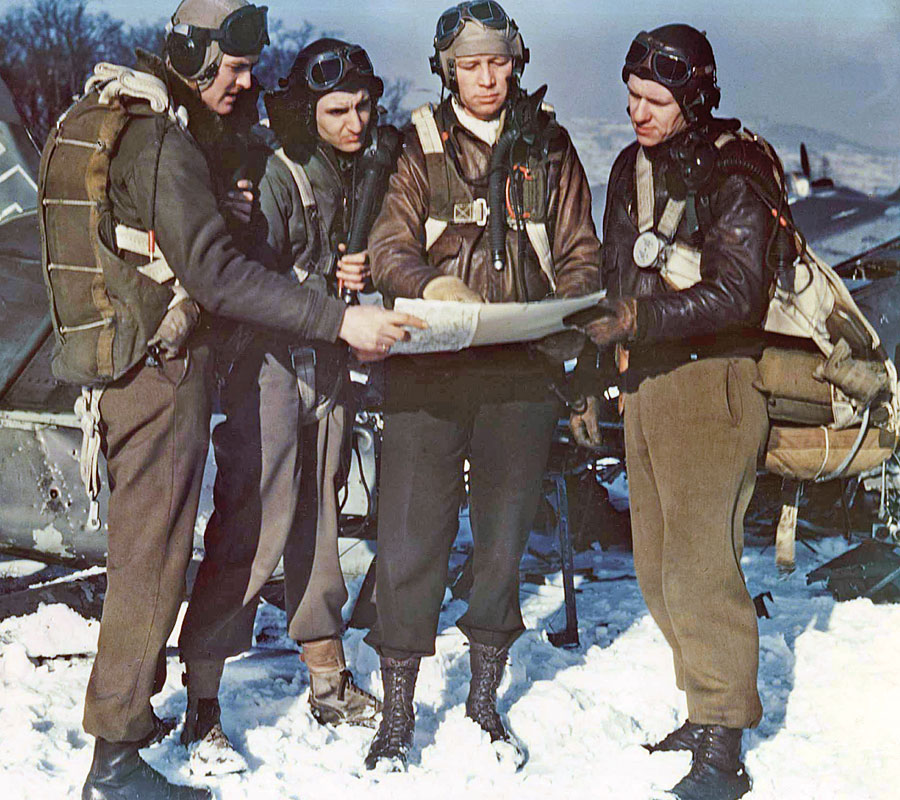 This shot illustrates the variety of gear worn by Army Air Forces (AAF) fighter pilots in the European Theater of Operations (ETO) — in this case Ninth Air Force pilots on the European continent. It shows how availability and preference influenced what was worn. Starting from left:

Motzenbecker wears B-8 back chute, B-10 flying jacket, late-model Royal Air Force (RAF) type “C” leather flying helmet (likely with an AAF AN-H-B-1 headset), RAF Mk VIII goggles, A-14 oxygen mask with special RAF wiring produced for use with U. S. microphones (if the aircraft was outfitted with a U. S. radio, there was also an adaptor to first plug into before connecting to the radio), U. S. Army Officer’s Drab (shade 54 -“pinks”) Elastique Wool Trousers, U. S. Army combat boots with two-buckle cuff and not yet dubbed for water resistance (at this time, these boots were still not on large-scale issue in
the ETO).

Stecker, the group commander, wears AAF B-8 back chute, the coveted, venerable A-2 flying jacket in russet brown leather, U. S. Army Type II horsehide gloves still fairly new and revealing their natural, tan coloring (the most typical glove of ETO fighter pilots), silk or nylon scarf likely made from a parachute canopy, AN-H-15 summer flying helmet in cotton with reinforcements for snaps (either applied to an early helmet by parachute riggers or a later version as outfitted from the factory), AN-H-B1 headset, RAF Mk VIII goggles, AAF A-14 oxygen mask with special RAF wiring produced for use with U. S. microphones, U. S. Army Officer’s Olive Drab (shade 51) Dark Elastique wool trousers, and U. S. Army parachutist jump boots.

Fry wears RAF seat chute (highly sought after due to its quick-release turnbuckle on the chest) with attached AAF parachute first aid kit tied to harness near silver-metal ripcord housing, AAF seat cushion sandwiched between seat parachute pack and RAF type “K” seat dinghy container (cushions weren’t usually used with “K” dinghy kits, and when they were, they were usually placed on top of the container to better cushion your butt), AAF B-2 jungle survival kit back pad (not uncommon in the ETO), which housed a multitude of survival items and is easily identified by the silver zipper chain in this photo, AAF A-2 leather flying jacket in dark seal brown, U. S. Army Type II horsehide gloves well-used and very soiled, late-model RAF type “C” leather flying helmet (likely with AAF headset AN-H-B-1) and RAF Mk VIII goggles, AAF A-14 oxygen mask with special RAF wiring produced for use with U. S. microphones, U. S. Army Enlisted Men’s 18 oz. Special Light Shade Olive Drab (shade 32) serge wool trousers of the later design with flap on rear pocket, and U. S. Army parachutist jump boots.

Among the four leaders, the only common elements of flying gear are the absence of life vests and presence of A-14 oxygen masks and the special RAF wiring. The absence of life vests confirms these pilots believe they have little chance of ditching or bailing out over water, yet Fry still has his RAF “K” dinghy kit on his seat chute, which is likely because it contained many useful survival items, it was too troublesome to remove (and replace if needed at a later date), and his P-47’s seat was already adjusted to allow for his height while wearing the dinghy kit. It’s also fairly safe to assume that, due to the extreme cold at the time, all would have been wearing long underwear, and the two pilots in A-2 jackets, if not all of these men, would have been wearing sweaters under their jackets. The pilots with B-8 back chutes also would have had seat cushions and, almost certainly, RAF “K” dinghy kits of a different type designed for back chutes (the parachute harnesses they wear have the female attaching clips in place for the RAF “K” dinghy kits); the dinghy kits would have been hand carried or delivered to their aircraft by vehicle, in most instances, but may have been left on the aircraft seat (far less likely).  By Robert F. Dorr and Charles E. DiSipio