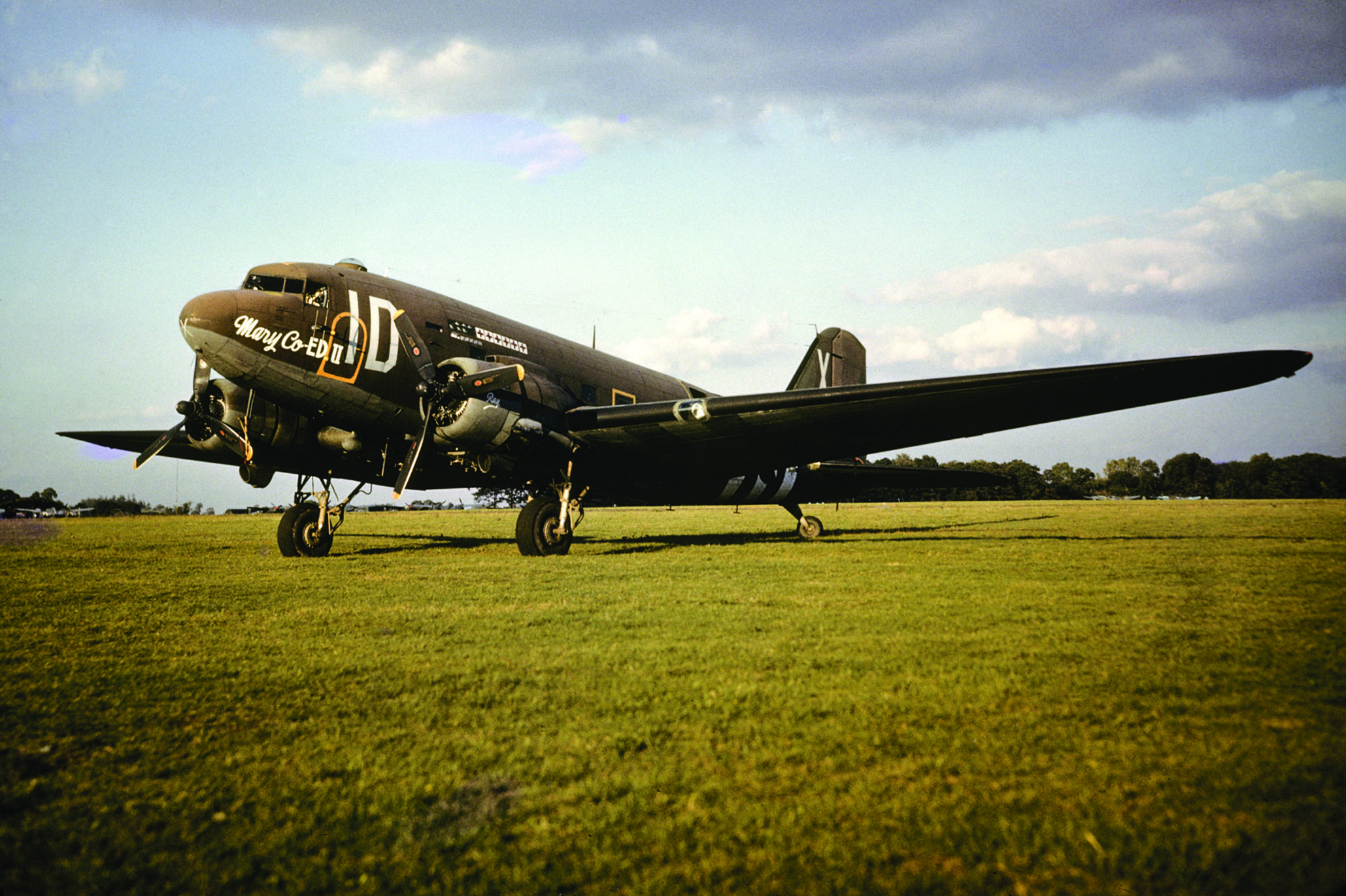 The backbone of the initial Allied assault against Erwin Rommel’s Atlantic Wall was the unsung heroes of the AAF’s Troop Carrier Command. Evolving from the pre-war Air Service & Ferrying Command, a specific need for the Army’s expanding parachute units led to the division of the now AAF’s transport units into the more commonly recognized Air Transport Command and new Troop Carrier Groups (TCGs). Dedicated to the mission of delivering airborne combat troops, gliders, and equipment directly to the battlefield, the first Troop Carrier Command was established in June 1942. The first two operational units were reorganized from existing Southwest Pacific transport units while training began in the states for what would eventually add another 26 groups to all theaters of war.

The subject of this Kodachrome spread, Mary Co-ED II, carries the ID-X squadron code of the 74th TCS of the 434th TCG photographed at Mount Farm, Cambridgeshire by Robert Astrella of the 7th Photo Group in the late summer of 1944. The 434th was activated in February 1943 at Alliance AAF, Nebraska, where the unit went through endless hours of precision training in night and day formation flying, glider pick-up, tow, and drops with actual paratroop operations. The group’s three squadrons moved to the UK in October, assigned to the IX Troop Carrier Command of the 9th Air Force and further assigned to the 50th Troop Carrier Wing (TCW).

For the next seven months, the 434th, and other TCGs in the UK, went through intense training for all phases of its intended deployment for Operation Overlord. In March of 1944, the 434th was reassigned to the 53rd TCW, which had been given the task of transporting the 101st Airborne Division for the initial Normandy night assault. A full night para-drop exercise was successfully conducted in mid-March, but as airborne invasion planning evolved, more glider drops were added. The 53rd Wing was then tapped to specialize in the perilous night glider delivery mission with several full-scale exercises in May to bring the groups up to full combat capability.

The morning of June 6, the 434th was tasked to deliver the second wave of the 101st, arriving at their release area right before 0400. Forty-nine of 52 C-47s towing WACO CG-4s made it to the target, delivering troops, anti-tank guns, jeeps, ammo, and equipment, then returning to their base at Aldermaston. Sixteen months of difficult training were over in just five hours!

The afternoon of D-Day, the group returned to Normandy with 32 aircraft delivering Horsa gliders for resupply and performing the same mission for the 82nd Division the next day. From there, the group was drafted into basic transport duties, as noted on Mary Co-ED II’s mission record on its fuselage, performing supply, Medevac, and specialized equipment runs.

Drafted twice again for its primary mission, the 434th made several successful daylight drops for the Market Campaign at Arnhem, Holland, in September and again for the Varsity crossing of the Rhine in March, 1945. The group was instrumental in supporting the lightning push through Germany that needed massive quantities of gasoline and supplies to keep the Allied armies sustained. The war’s end in May gave the group its most treasured mission of transporting 17,500 Allied POWs to relocation centers and hospitals in France and Belgium.  Relieved in mid-June, the air and ground units arrived back in the states by early August, ending their brief but honorable war service. –Stan Piet