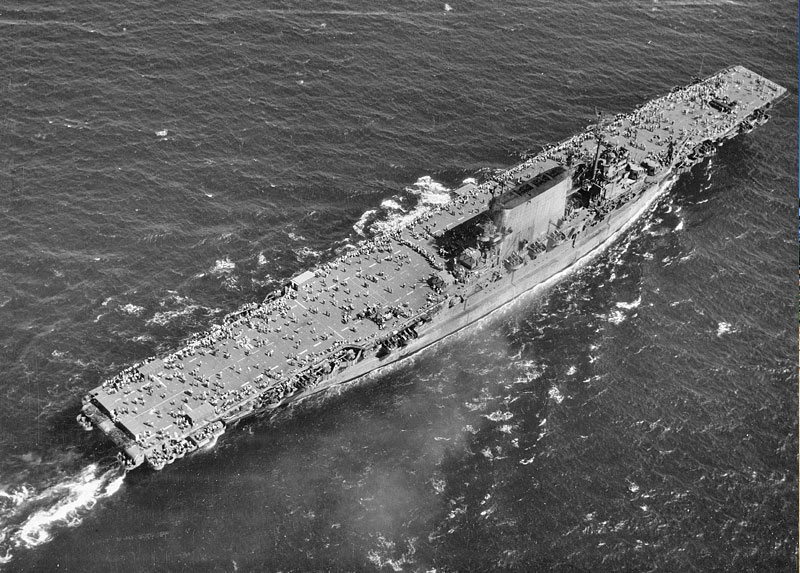 In the summer of 1945, the U.S. military spawned a generation of poets who shared one sentiment:
“Those who want to be a hero,
They number almost zero.
Those who want to be civilians…
Gee—they number in the millions!”
As early as 1943, the Pentagon began contingency planning for returning millions of personnel from overseas whenever victory was won. It was an enormous task, sardonically cited by cartoonist Bill Mauldin who showed the everyman GIs Willie and Joe sulking at an embarkation port: “I don’t remember no delays getting us over here.”
The first “Magic Carpet” ships left Europe in June 1945, barely a month after VE Day. With the Navy fully committed to the Pacific, most of the shipping came from the Merchant Marine or the U.S. Army, carrying some 430,000 men to the East Coast per month. Fleet aircraft carriers were popular Magic Carpet rides, as they could accommodate 3,000 or more returnees. The brand new Essex class ship, Lake Champlain (CV-39), was modified for Atlantic use, and the battle-scarred, invaluable Enterprise (CV-6) made Carpet cruises in both directions.
After Japan’s unexpected capitulation in September, the Navy swung into action with ships to spare. Some 350 Pacific Fleet vessels were employed, everything from transports and hospital ships to battleships and cruisers. Meanwhile, 29 transports shuttled from the Far East, delivering China-Burma-India veterans to loved ones.
Whatever the type of ship, the accommodations were steerage class. Bunks were welded three, four, and even five high, with round the clock meal schedules. Water—always at a premium aboard ship—was strictly rationed. Said more than one serviceman, “When we walked off that boat we were pretty rank—but nobody cared!”
The transatlantic movement went both ways. With Magic Carpet ships being empty eastbound, more than 400,000 German and Italian prisoners were repatriated, however rubble-strewn their nations may have been. The task was completed by early 1946.