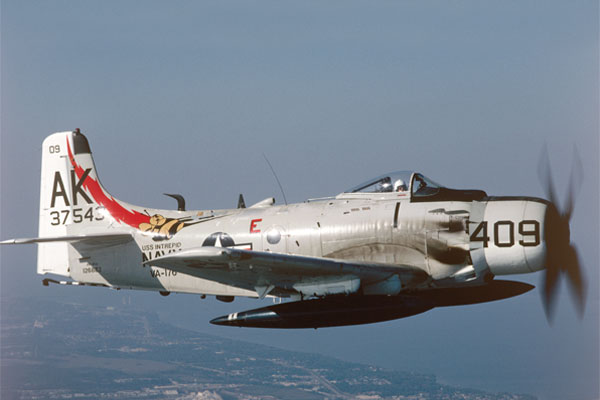 The Day I Nuked Los Angeles

During the early 1950s, I fooled around with football, girls, and socializing while I was attending college and really didn’t know what I wanted to do in my life. When I saw the Korean War movie The Bridges at Toko-Ri, I knew right then I wanted to be a naval aviator.

Although I had never been up in an airplane before, I didn’t give it much thought as I progressed through my flight training in a variety of aircraft.  My first phase was in the very docile T-34 Mentor and then into the big roomy cockpit of the T-28 Trojan. Somewhere along the line, my grades must have been good enough because I was selected to continue and was sent to attack training. Even though I wanted to fly fighters, I didn’t like being strongarmed into signing up for the extra year that was required of a fighter pilot.

During my final phase of training I was selected to fly the WW II-designed, single-engine, big behemoth monster called the Douglas Skyraider.

That was my introduction to a tailwheel airplane. The instructor gave me some pointers on how to handle the takeoff, but first wanted me to get the feel of it so he told me to make a fast taxi, go to full power and get the tail up, and then chop the power to taxi speed again. The last thing he said was to add right rudder to counter the torque of the big radial engine. Everything seemed to be going well as my feet danced on the rudder pedals while I kept the Skyraider pointed in a somewhat straight line. The good times ended quickly, however, when I chopped the power and was along for the ride as the Skyraider made a quick 90-degree turn to the right. Fortunately, I was still on the runway — no one had told me to ease up on the right rudder! Eventually the Skyraider would be my front office for the next few years as I learned how land it on a pitching carrier deck, fire its 20mm guns, drop bombs, and launch rockets from this flying dump truck.

To read more, open the PDF by clicking the link: https://www.flightjournal.com/wp-content/uploads/2014/06/idiots-loop.pdf?746277