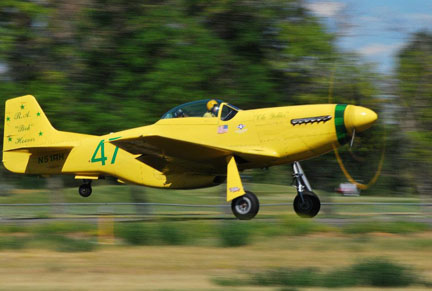 Rexburg, Idaho, pilot John Bagley says his next turn flying fast and low in a pylon air race will wrap-up his racing career. Flying in World War II-era North American P-51 Mustang called “Ole Yeller,” Bagley is one of the flyers in the National Championship Air Races at Reno, Nev.

The event, which also includes airshows, will be held Sept. 11 to 15 at the Reno-Stead Airport. It’s the last of the pylon races that were a popular facet of American life in the 20s, 30s and 40s.

“I’m old enough to know better,” he said. “If it weren’t the 50th I wouldn’t be going this year. But because it’s the 50th  and ‘Ole Yeller’ was there for the first, that’s why I’m going. Am I going to race hard?  No. But sometimes when I get racing, my horns come out, and when my horns come out you never know what’s going to happen. But I don’t plan on beating up the equipment.”

For the complete story by Joseph Law of the (Pocatello) Idaho Standard-Journal, click here.

Photo via the Idaho Standard-Journal