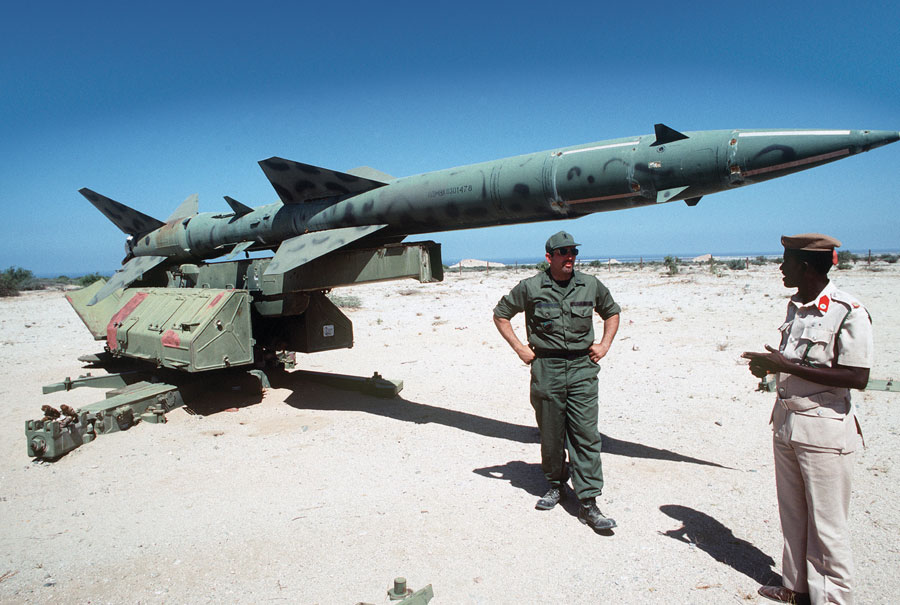 In May 1960, a CIA-operated Lockheed U-2 reconnaissance aircraft was destroyed in flight over central Russia. From more than 60,000 feet, Francis Gary Powers parachuted into captivity for two years, giving Moscow a huge propaganda victory over President Dwight Eisenhower, who pledged to stop all overflights.

The surface to air missile had arrived: the NATO alliance called it the SA-2 Guideline.

Though Powers’ U-2 was by far the best-known SA-2 kill, the missile already was combat proven. Deployed in 1957, a high-flying Nationalist Chinese RB-57 was downed over the Asian mainland two years later. The SAM returned to the world stage in October 1962 when a U.S. Air Force U-2 was downed over Cuba during the strategic missile crisis.

Like most Soviet weapon systems, the SA-2 was known by various designations. It began as the S-75 but more widely was called V-750. Its popular name was Dvina, named for the Russian river.

SA-2 is a two-stage missile: a booster with solid fuel propellant that rockets off the launcher for the first five seconds after launch. Then the liquid-fuel second stage ignites, providing power for the duration of the flight, achieving Mach 3 for 20 to 25 seconds. Its effective altitude usually is cited as more than 80,000 feet.

The 420-pound warhead kills by fragmentation, spewing lethal fragments 200 feet or more from point of explosion.

Guidance was achieved by two radars. NATO dubbed the early-warning set Spoon Rest, which could track a target as much as 170 miles distant, while the Fan Song tracked the target and directed the missile within the 30-mile terminal guidance phase. SA-2s were widely deployed in North Vietnam from 1965 onward. From a high of 5.7% success in 1965, kill figures steadily declined to less than 1 percent at the time of the 1968 bombing halt. Air Force “Wild Weasels” and Navy “Iron Hand” anti-SAM teams coupled with electronic jamming proved highly effective. When the air campaign resumed “up north” in 1972, the Vietnamese slightly improved on their previous record, downing at least 49 U.S. aircraft from more than 4,200 launches, or 1.15 percent. Clearly, the Wild Weasels and Iron Hands had mastered their enemy.

Start to finish, the Vietnamese downed 150 “Yankee Air Pirates” from more than 9,000 missile firings, or one in 60. Nevertheless, a SAM launch remained a memorable experience. Brig. Gen. Robin Olds said, “I had 22 shot at me, and the last one was as inspiring as the first.”

Commander John Nichols, a three-cruise naval aviator, described a SAM evasion technique. “The key to beating SAMs was early sighting. TacAir pilots learned to avoid hugging cloud decks since the missiles could pop up undetected through the undercast. In reasonable weather, the telltale dust cloud, which indicated a launch, was the best visual cue. The dust was quickly followed by a streaming white trail of burning nitric acid and kerosene — the second stage.”

Timing was crucial in defeating a SAM. If the pilot broke into his evasion too early, the missile had time to correct. If he waited too long, he lacked enough time to compensate. Therefore, pilots used the SAM’s vastly superior speed against it. As the missile approached detonation range, its small wings could not “hack the G” of a hard turn. So the optimum evasive maneuver involved two simultaneous planes of motion. A barrel roll turn, keeping the missile at least 30 degrees off the nose, usually worked.

The Guideline remained in use around the world long after Vietnam. It took a toll of Israeli aircraft during the 1973 war with Egypt and Syria and, ironically, both Iran and Iraq employed SA-2s during their 1980-1988 war, but with disappointing results.

Georgian SA-2s were reportedly effective against Russian jets in the 1993 conflict, which may have been the last time Guidelines were successfully employed.

Naturally, over the years, the missile and radars have been upgraded, including electro-optical tracking. Though retired by Russia in 1996, the SA-2 is thought still operational with 20 nations. Thus, the original S-75 concept demonstrates exceptional “stretch” over a period of more than half a century.