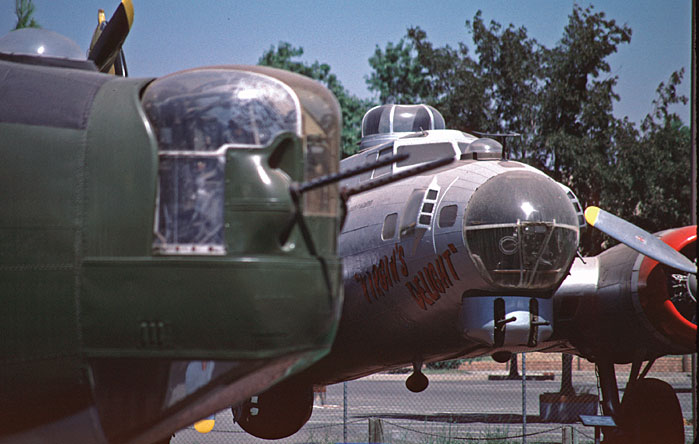 The Scarff ring, a Royal Flying Corps contribution to bomber longevity during the Great War, was a mechanical mount for .30-caliber machine guns. Bungee cord offset the weight and provided some balance, making the mount a functional way for backseaters to discourage attackers from many angles.

By the 1930s, bomber defensive armament had evolved to include rotating turrets. Of the armstrong variety — it took strong arms to manually move them — the devices nonetheless pointed the way toward more capable gun turrets. The British were keen on turret improvements leading up to World War II. Their bombers initially led early B-17s and B-24s when it came to power turrets, and some in the UK guarded that technology from American observers in 1940, fearing the still-neutral U.S. might let it slip into the wrong hands. One of those American observers, then-Lt. Col. Grandison Gardner, was an armament expert. He believed that American bombers should incorporate British power turrets, or if they were denied to the Americans, then an indigenous turret industry needed to blossom in the U.S.

German and Japanese fighter tacticians came to respect the far-reaching sting of American power turrets that could reach out beyond 1,000 yards. To the surprise and dismay of the Americans, the enemy added head-on attacks, where closing speeds could overwhelm the best efforts of gunners using hand-held, socket-mounted weapons. A counter was the use of power nose turrets in both B-17s and B-24s. Early B-24 nose turrets were simply tail turrets facing forward, with additional wind baffling around the gun ports. For B-17s, development of a remotely sighted Bendix turret, reminiscent of that which had been disappointing as a ventral turret in some B-24s and B-25s, emerged a winner when nested in the chin position of B-17s. Both B-17s and B-24s tried remotely sighted ventral turrets, but replaced them with the ubiquitous Sperry ball turret that carried its gunner inside for a panoramic view of the bomber’s lower hemisphere.

Most B-24s used a rotating tail turret, based on the original Consolidated design and ultimately modified and manufactured by other contractors. B-17s starting with the E model relied on a simple pivoting post carrying two .50-caliber guns swung manually by the tail gunner.

An alternative to head-on or rear fighter attacks was the classic pursuit curve. It was a dynamic, changing swing by a fighter pilot intended to keep the fighter’s guns aimed just ahead of the bomber at all times to cause a collision between ammunition and airplane. A pursuit curve was deadly when well executed, but it also locked the fighter into an aerial dance that could be predicted by bomber gunners with some certainty.

Since the enemy fighter’s guns were fixed to fire forward, the fighter pilot’s aiming was accomplished by presenting the nose of his aircraft toward the bomber. This was significant for bomber gunners in two ways. First, turrets were designed to incorporate armor plating and sometimes armor glass in front of the gunner; whatever he was shooting at was probably shooting back! Second, and very important to overall gunnery rationale, the fighter’s frontal aspect gave the gunner an opportunity to judge range based on the known wingspan of the attacker. Everything from the small metallic circle in manual ring-and-bead sights to the complex computers used in gunsights for power turrets used wingspan to determine distance.

The bomber gunnery problem evolved during World War II from simple sights, with which the gunner had to apply learned amounts of offset to assist his bullets in intercepting the fighter, to computing sights that took the guesswork out, as long as the gunner correctly input information including his aircraft’s airspeed and altitude.

The ultimate expression of wartime bomber turrets was the complex system of remotely sighted turrets made by General Electric for the B-29.  Developments in computing gunsights coupled with ergonomic considerations gave B-29 gunners relatively comfortable seats in the pressurized fuselage, where they handled grips that remotely moved small aluminum turret domes containing, usually, two .50-caliber weapons. B-29 turrets could be smaller since they did not accommodate a gunner, armor, radio, and oxygen systems. The result was less drag.

Superfortress gunners could share firepower, reassigning their primary turret to another gunner, whose sighting station computed the correct aim point. Some B-29s were delivered with one 20 millimeter cannon plus two .50 caliber machine guns in the tail. The 20mm weapon brought fewer total rounds to the fray. The drop of the bullets as they sped away from the guns was different for the 20mm and the .50 caliber weapons. The computing gunsight factored the lesser drop of the .50s. B-29 tail gunners were taught to save their big 20s for targets no farther than 600 yards out, when differences in bullet drop were negligible.

The zenith of manned bomber turrets coincided with the brief window in time where such armament could be effective as part of an overall bomber defense that also relied on fighter protection to carry the fight to the enemy. Iconic images of gunners curled inside lower ball turrets, or deliberately scanning the skies from rotating top turrets, are part of the fabric of World War II. Their era has gone, but the fascination remains.