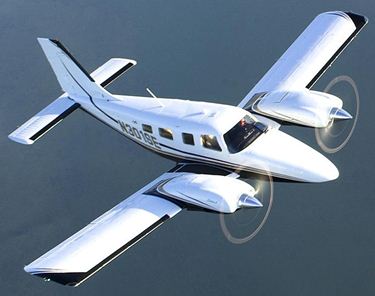 I found your article on Seneca tail flutter quite Interesting and it brought back some sobering memories of December 27, 1976, as I am one of the pilots who luckily survived a Piper Seneca in flight break-up, I would just like to add some comments that may help aircraft owners realize the potentially serious problems with trim tab free play.

The flutter testing flights for N33589 was not taken as very dangerous because of our previous success with the Seneca. In fact, I had just completed a series of flutter flights on a Seneca II equipped with Robertson spoilers and tip tanks. The accelerometer traces were good, but the camera that recorded the speeds and altitude malfunctioned. The FAA wouldn’t accept our data without speed verifications, and by the time the bad film was developed the aircraft was reconfigured for delivery. The owner was impatient and wanted his aircraft, The FAA allowed us to deliver this aircraft with some restrictions, and flutter testing was to be completed on N33589.

The intended test was to climb to 25,000 feet, camera and recorders on and to pulse each control at several predetermined speeds and at Vd (10 percent past red line). The first flights on December 24th were aborted because low temperature (-45 F) at 25,000 feet froze the elevator jack screw and only low-speed data could be collected. The heavy grease was removed from the jackscrew and a light silicone spray was used.

Flight tests on December 27 appeared to be going well. I climbed to 25,000 feet on an IFR clearance above a 4,000 to 6,000 foot broken cloud cover. The test equipment turned on and trim function was good. Intermediate speeds looked good and at Vd (250 IAS) at approximately 20,000 feet, I completed the following control pulses: aileron (spoiler equipped) left and right, rudder left and right, elevator down, and then I reached to start the up-elevator pulse. The aircraft was in trim and my left hand was holding the wheel lightly. The air was smooth and there had been no vibration.

It was like an explosion, the elevator failure resulted in an extremely violent nose down tumbling. Both wings tore off, once outboard of the engine nacelle and again at the fuselage. The fuselage was ruptured, part of the tail section and rear door were gone, the fiberglass nose section was gone and the windshields were blown out. Negative Gs had me pinned against the cabin ceiling and the violent shaking had torn off my helmet. I had to protect my head with my hands to keep from being knocked out; the survival instinct had taken over. I knew I had to get out of there to stay alive, but I couldn’t move and couldn’t do anything but try to protect myself against the beating I was taking, As abruptly as it started, the violence stopped. It was smooth and calm, with a sense of slow rolling or tumbling. The cold air was blowing through the hulk of the fuselage (-40F). Seat belt off and through the cabin door, I opened my chute immediately, which could have been fatal. As my chute opened, an engine with a section of wing came by from above. I can still clearly see that engine in my mind. The prop was feathered and the engine was running. The total sequence of failure and getting out only took seconds, but it felt like minutes.
I was awed by the destructive disintegration of that aircraft and my survival. I was now floating down at 20,000 ft or so. There were small light pieces of aluminum, insulation and fabric floating down all around me. In any direction I looked, it was like confetti.
This was December and I was over a cloud layer somewhere over the Cascade Mountains of Washington. I wasn’t dressed for this situation and again my thoughts turned to survival. Luck was on my side that day. Wear some torn clothes, a parachute under your left arm, put up your thumb and you get a ride every time.
This was the first aircraft lost by Robertson in flutter testing. The FAA took a harder stand for more testing and complete evaluation by Robertson for flutter clearance. Prior to this loss, Robertson inspected and conformed only its modification and assumed that an airworthy aircraft would have all controls balanced and free play within limits. N33589 did not have the elevator tab free play measured before that test, but I firmly believe it was past its limits. On the walk-around inspection. I commented to the company inspector about the apparent amount of free play. We both agreed it was a common thing on Seneca’s. Hindsight is 20/20, and I know where I should have stopped that flight test.

Some time later, Robertson elected to continue the certification of the tip tanks on the Seneca II. The FAA insisted that we place the trim tabs at the maximum limit. Robertson was not evaluating the tail, but was looking for differences in wing response with the tip tanks. Robertson lost the argument, and we instrumented the tail and went to maximum free play on the tab. But wait: when the inspector checked the original tab free play, he found it considerably past the limit and we had to build new bushings to tighten up the free play to the maximum allowed. The flight-testing was conducted as cautiously as possible with several flights of increasing speed and data reviewed between flights. I had declined to do this test flight and a consultant pilot was hired.

On one flight near Vd a problem was encountered that nearly caused the loss of this aircraft. The cabin door popped open at 225 KIAS, The pilot thought it was coming apart. The accelerometer couldn’t he measured because it went off scale. The door problem couldn’t be solved satisfactorily and the pilot insisted that the front door he taped shut with aluminum tape. (His only exit now would be through the rear cabin.) The test was successfully completed and proved the aircraft is flutter-free when within limits. The consulting pilot still believes the door problem could have caused the tail failure of N33589. It’s interesting that Piper has redesigned the door latch on later models.

I do believe the Seneca Is one of the best light twins on the market. Most pilots and maintenance facilities do not understand the consequence of improperly balanced controls and excessive tab free play. Robertson Corp. has corrected many of these problems during R/Stol modifications, and the owners are usually unhappy at the added cost. An airplane with controls out of limits cannot be returned to service and should be grounded until it’s corrected.

Pilots and mechanics may think of flutter as a continuing vibration. Divergent flutter should be thought of as an explosion. If the conditions are correct, it’s as dangerous as a lighted stick of dynamite.

My recommendation for the owner of any aircraft is to assure that your aircraft is maintained properly. All control surfaces can be checked on a simple preflight. Free play limits are design limits with no margin of safety if they are exceeded. Replace bushings or install high tolerance bolts to stay within these limits. An AD is not issued unless the airworthiness is in question and this means an unsafe condition exists. These unsafe conditions are discovered ordinarily by you, the pilot. Pay attention and know your aircraft.