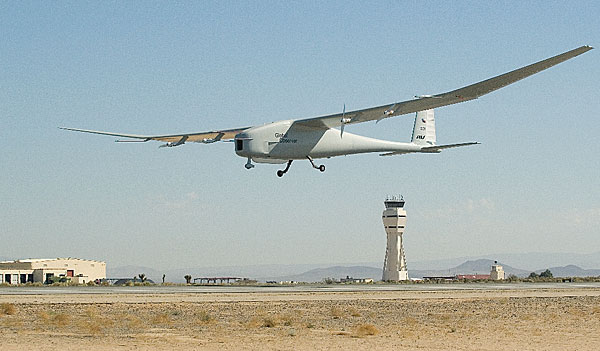 The AeroVironment (AV) Global Observer unmanned air vehicle has flown successfully at Edwards Air Force Base in California. This is a high-altitude, long-endurance unmanned aircraft system that is touted by AV “to combine the best attributes of satellites and both manned and unmanned aircraft.”

Its revolutionary liquid hydrogen-fueled
propulsive system, an LH2 internal combustion powerplant driving four high-efficiency electric motors with propellers, will allow the AV Global Observer to operate in the stratosphere over 12 miles (63,360 feet) high for five to seven days at a time, while loitering over areas of observation some 600 miles (965.6 kilometers) in diameter.

This milestone marks the beginning of high-altitude, long-endurance flight testing for the demonstration and operational utility phase of this Joint Capability Technology Demonstration program. Two Global Observer aircraft, each flying for up to a week at a time, could alternate coverage over any area on the earth, providing a seamless, persistent platform for high-value missions such as communications relay, remote sensing, long-term surveillance and border patrol, officials said.—Steve Pace