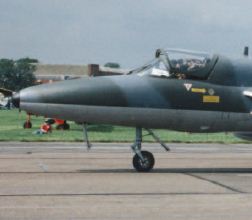 When the prototype of the Sydney Camm-designed Hawker Hunter first flew at Dunsfold, Surrey, UK on July 20, 1951, its success and future were not assured. A rival interceptor, fighter aircraft from Supermarine, the Swift, was also competing for the RAF F.43/46 requirement.

Sixty years later, the total production figure of 1,985 aircraft speaks for itself. The Hunter’s success was also assured in September 1953, when Neville Duke broke the world air speed record in a modified Hunter Mk.3 (WB188) at 727.63mph, although the Swift broke this short-lived record on September 25, flown by Michael Lithgow. The RAF ordered 20 Hunter F.1s, a pre- production batch, before finally committing to the type, entering service in July 1954 to replace Gloster Meteors, Canadair Sabres and DH Venoms. The Hunter’s endurance at little over one hour was a detriment. Many modifications and improvements occurred to subsequent aircraft, and the Hunter F.6 was fitted with an Avon 203 with better endurance. RAF Hunters first flew in conflict in  the 1956 Suez Crisis, then in 1962 in Brunei, SE Asia and in 1964 in Aden. A side-by-side two-seat trainer, the T7 advanced trainer was developed in 1957 from the Hunter F.4. The Hunter was exported to 17 air forces worldwide (429 new aircraft plus 700 refurbished aircraft), the last operational examples (FGA.9s) being retired around 2000 from the Zimbabwean Air Force. Today’s formation of eight airworthy Hunters, including two from the Dutch Hawker Hunter Foundation and five from Team Viper at Exeter, UK, was showcased at the Cotswolds Air Show at Kemble, UK, June 18-19, 2011. It was a reminder of the two RAF Hunter formation teams, the late 1950s no. 111 Squadron’s Black Arrows (sometimes flying with as many as 22 Hunters!) and no. 92 Squadron’s Blue Diamonds with a mere 16 Hunters! Happy 60th birthday, Mr Hunter.