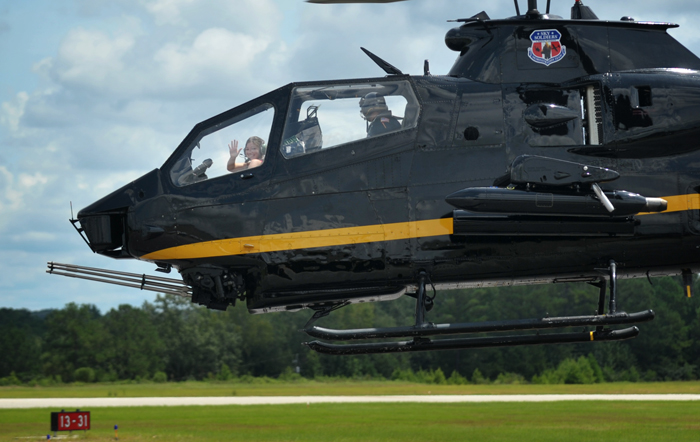 Dozens of area residents and military veterans showed up at Blackwell Field Airport in Ozark, Ala., on Saturday for the unique chance to fly in Vietnam-era U.S. Army helicopters.

The Friends of Army Aviation-Ozark partnered with the Hampton, Ga.-based Army Aviation Heritage Foundation to present an open house event of sorts, celebrating the permanent arrival of a UH-1H Huey  and an AH-1F Cobra, both built by Bell, to Ozark. At the day-long event, groups of 10 were taken on a flight in the Huey, while individuals were able to ride along in the Cobra. The foundation helped Friends of Army Aviation obtain operational control over the helicopters, which will remain at the hangar and likely be used for future flights.

“For several years, we were without a flyable aircraft,” said FAA-O member Michael Medlen, a Vietnam veteran who devotes much of his time to helping the nonprofit organization.“We want to keep the American people in tune with the legacy of Army aviation. Vietnam was known as the helicopter war. More people, soldiers and supplies were moved throughout the battlefield through use of helicopters than any other battle past or present.”

For the complete story by the Dothan (Ala.) Eagle, click here.