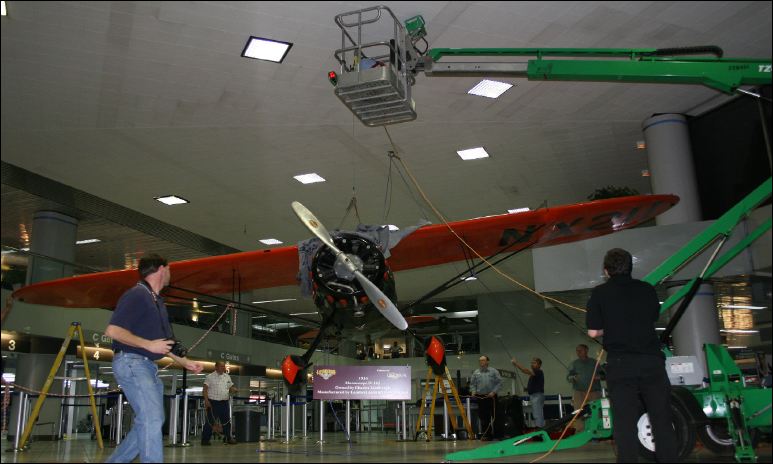 Story and video by the Missouri History Museum

Charles Lindbergh’s plane, which had previously hung in Terminal 1 at Lambert-St. Louis International Airport since 1979, has returned to its place of welcoming passengers to the St. Louis airport. The famous aviator’s 1934 Model D–127 Monocoupe, an iconic symbol to many St. Louis travelers, has been absent for more than two years because of terminal renovations. Missouri History Museum installed the plane in the early morning of Oct. 20, 2013.

Over the course of its more than 30 years hanging in Lambert, the Monocoupe was been exposed to dust and other airborne pollutants along with the stress of being suspended from the ceiling. The cumulative effect of these conditions made it necessary for the plane to undergo a complete conservation effort in order to ensure the continued preservation of the aircraft. Stress fractures along several seams in the plane’s fabric covering and the tears caused by general wear required professional attention. When Lambert announced that Terminal 1 would be renovated, the Missouri History Museum worked with Lambert to remove the plane and use the time needed to complete the renovations to conserve the plane.

Conservator Linda Landry managed the conservation effort. She consulted with professional aircraft conservators and performed chemical test analysis on the plane’s paint and fabric. Test results, along with input from James Harvey, a leading expert on Monocoupes, revealed that the fabric of the Lindbergh Monocoupe was the original 1934 aircraft skin. This is exceedingly rare for an aircraft to have maintained its original covering for so long. Once the age of the fabric and covering was established, all effort was made to retain the historic integrity of the plane.

The Monocoupe was constructed using “fabric and dope,” a process still used today. Historic materials and the passage of time create unique challenges for preservation and conservation. In this type of construction, fabric is fitted over the frame and then covered with several layers of airplane dope, a lacquer that is used to protect, waterproof, and make taut the cloth surfaces of airplanes. As the dope dries it shrinks, causing the material to stretch tightly over the frame, creating a smooth surface. Unfortunately, the dope never stops shrinking, so over the years the ever-tightening fabric can put pressure on the framework until the fabric either tears to relieve the stress or weaker parts of the interior structure snap.

Landry and conservation lab assistant Cailin Carter performed the conservation treatment. The conservation team repaired seams and tears with precision patches and paint compounds. A full inch by inch cleaning of the interior and exterior of the plane was undertaken to remove nearly 34 years of accumulated contaminants.

Re-hang of the Lindbergh Monocoupe at Lambert International Airport from Missouri History Museum on Vimeo.