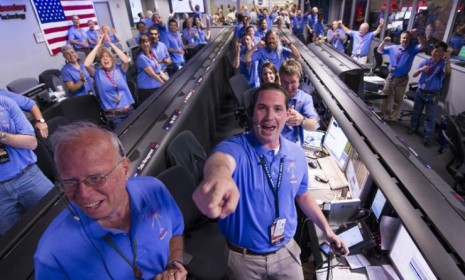 The rover’s near-miraculous mission has rekindled excitement about the space program. Here’s where we might be going next

The stunning landing of the Mars rover Curiosity and the images it beamed home have renewed public fascination with the U.S. space program. President Obama even put in a personal call to the control room at NASA’s Jet Propulsion Laboratory in Pasadena, Calif., telling the Mars team that their achievements were “mind-boggling,” and encouraging them to “keep up the good work.” Now that the venerable space agency — which disappeared from the headlines after the retirement of its space shuttles last year — has our attention again, what is it planning for an encore? Here, a brief guide to what it has in the pipeline:

What is NASA’s next big mission?
NASA is gearing up to commit to funding two big projects in the next two weeks. One, the Mars Atmosphere and Volatile Evolution Mission, a surface mission to Mars intended to follow up on Curiosity’s work, will evaluate more precisely how much water the planet might have harbored in the past. Three options are on the table for the other mission. One would be a visit to a comet. One would send another lander to Mars to drill into the Red Planet’s core in search of clues on how planets form. The other would explore even deeper into space.

How far?
Some scientists want to send an unmanned craft to examine Saturn’s largest moon, Titan, one of the few space destinations with a true atmosphere. The Cassini-Huygens orbiter, launched in 1997, revealed Titan to be dotted with icy continents and vast methane lakes, “a world kind of like Earth, rather than a rock spinning in space,” according to NASA astrophysicist Jonathan McDowell. The Titan Saturn Mission, if greenlighted, would send a vehicle to Titan and drop a boat into one of the lakes to search for life.

Are there any other possibilities?
Plenty. The NASA Innovative Advanced Concepts program has 28 proposals to “transform future aerospace missions.” Among the mind-bending pitches are a lunar colony, a Venus rover powered by a solar sail, and a fusion-driven rocket that could cut the travel time to Mars from 18 months to just one. But with all of these projects, there is a catch.

What’s that?
Money. Budget cuts by the Obama administration forced NASA to table some projects last year. The U.S. had hoped to team up with Europe starting in 2016 to bring soil and rock samples back from Mars to Earth — a top scientific priority — but the budget cuts forced NASA to bow out. NASA’s budget for exploring Mars is dropping next year from $587 million to $361 million, and continuing down to $189 million in 2015, before heading back up to $503 million in 2017. The shortfall has been exacerbated by cost overruns on projects the space agency didn’t scrap, including the $8 billion James Webb Space Telescope and the $2.5 billion Curiosity mission.