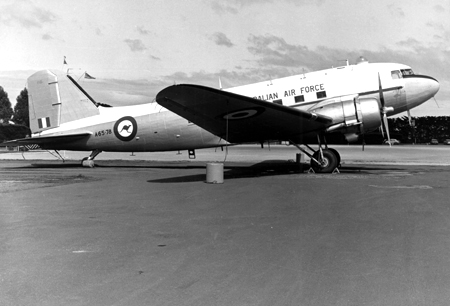 It was lunchtime yesterday, a warm and sleepy autumn afternoon, when a museum piece from the Historical Aircraft Restoration Society hurtled unexpectedly down the runway at Albion Park Rail in New South Wales, Australia, and launched its ageing 8,000-kg. mass into the sky.

As it climbed skyward, the sunshine caught a spider’s web over an exit hatch in the roof, adding to the olde worlde quality. The web was a good sign, suggested someone on board. No emergency escapes necessary lately.

The plane is a Douglas C-47 Dakota, a 68-year-old ex-Royal Australian Air Force aircraft, whose joy flight between Albion Park Rail and Clifton yesterday was a prelude to Sunday’s Wings Over Illawarra festival.

Pilot Doug Haywood considers the aircraft was the Airbus A380 of its time. “It’s almost indestructible,” he said.

For the complete story by Angela Thompson of the Illawarra (NSW) Mercury, click here.