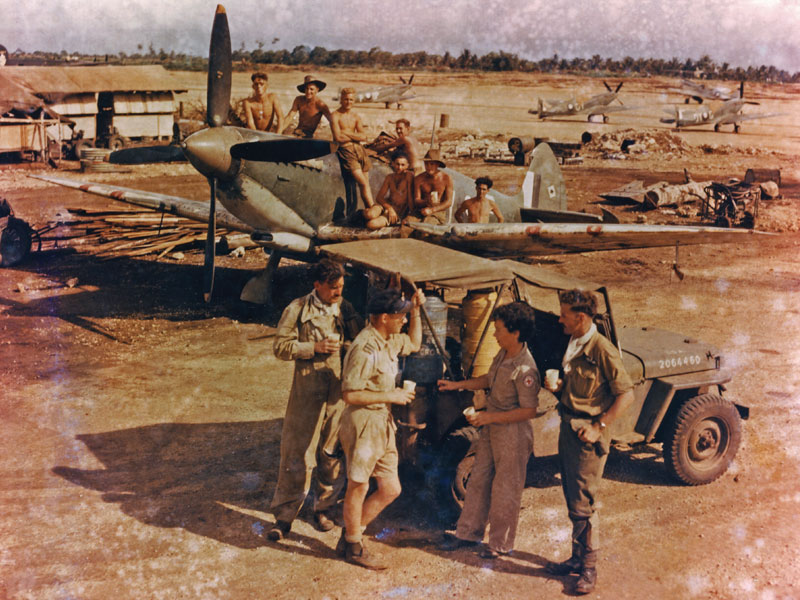 Part of the enjoyment of viewing WW II photographs is seeing the never-ending panorama of men and women at work during the war. Young and cocky fighter pilots, winsome women serving donuts or riveting bombers, and mechanics lounging for a moment before returning to the endless tasks of keeping high-performance aircraft ready to fight.

Much of the time, we can only surmise who these people are, and they must remain as nameless icons from that magic, malevolent, and magnificent era. Such was the case with an aging color image of 11 people around a Royal Australian Air Force Spitfire in the Pacific, posed, yet relaxed, as this waypoint in time receded inexorably into the past. Who were they? Where did they go? Publishing the photo in Flight Journal’s recent Spitfire special issue paid respects to them and the rugged war they fought in austere conditions, but they all remained nameless. Nameless until Michael Couche opened that issue of the magazine in Australia and thought he recognized somebody under a distinctly Australian broad-brimmed hat.

Michael said: “ … one face looked familiar, and after confirming it with my mother over Christmas/New Year, I can tell you that the second ground crew from the left (standing on the starboard wing in the slouch hat ) is my late father LAC [Leading Aircraftsman] Leslie James Couche, 452 Squadron, 80 Wing from Adelaide, South Australia.”

The senior Couche, shirtless and tanned, wears his hat at a stylish slope, and he grins for the camera with a look that literally will go down in history. Where did he go and what did he do when the war ended and Spitfires no longer needed his ministrations on muddy Morotai? Michael picks up the trail: “I can tell you that Dad left the air force after returning from the Occupation Forces in Japan immediately after the war. He took up a trade French polishing before joining the Education Department and training as a High School Technical Studies teacher. He retired from teaching in his 60s and passed away at 77.” Couche’s family still wonders if his death from cancer had anything to do with a trip to Hiroshima during the occupation.

French polishing is a classic and time-intensive wood finishing process that adds lustrous elegance to everything from fine furniture to musical instruments. There’s something poetic about Leading Aircraftsman Couche turning from the gritty deprivation of Morotai to the subtle art of French polishing after the war. One can presume the patience and finesse required for his postwar profession earlier manifested itself on how Couche maintained those racehorse Spitfires of the RAAF under trying conditions.

The existence of this color image doubles the number of wartime pictures Michael Couche and his mother have of father and husband Leslie James Couche. Their other vestige of his wartime service is “a B&W photo of him sitting on a Spitfire filling the header tank – obtained from The Australian War Memorial,” Michael explains, “so you can imagine my excitement at stumbling over a color photo of Dad in your magazine.”

The Royal Australian Air Force counted a total of nearly 217,000 members during World War II; in recent years, the full-time strength is pegged at fewer than 15,000 members. Demobilization following Japan’s surrender sent thousands of Australians home. Like their American compatriots, the Australians had families to raise and peacetime professions to establish. We are still left to ponder the names and fates of the other 10 people in the Morotai photograph, but there’s a newfound identification with all of them, vouched by the smiling face of Leading Aircraftsman Leslie James Couche, 452 Squadron, 80 Wing.

We live in an era where today’s lunch plate gets digitally photographed and sent to presumably interested coworkers; where whole strings of pictures of last night’s party will be Facebooked forever. Cute babies vie with cute puppies for space on our smartphones. It gets increasingly difficult to remember when photos were a scarce commodity, and color photos were magic and costly. For this weatherbeaten wartime view of RAAF members to have made it into the 21st Century is a remarkable gift to all of us. For the Couche family in Australia, it’s a window into the war that they never imagined would open to them.