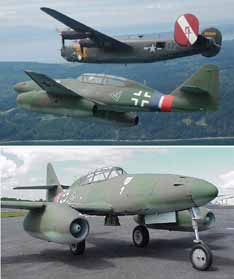 The Collings Foundation of Stowe, VT, the flying museum that operates, among other things an F-4 Phantom, B-24 and a B-17 has announced that they are not only adding a Messerschmitt Me-262 to their fleet but we get a chance to fly it. There is, of course the minor stipulation that we have to make a sizeable donation to the procurement and support of the faithful reproduction of the famous German jet. In effect, we become one of its owners. It goes without saying that this is a once in a lifetime chance for pilots to experience the historic aircraft from the cockpit! Flight Operations Director Rob Collings explained, “The Me-262 embodies all the characteristics expected of an aircraft that changed aerial combat forever. The mere sight of the Me-262 struck terror in the hearts of all Army Air Corps aircrew that saw it in the sky; it was just so far ahead of its time! Never before has anyone had a chance to fly this legend and now they do!”

Training will take place in the dual control Me-262, an aircraft recreated to exacting standards from an original Me-262 trainer. This continuation aircraft offers all of the originality of the groundbreaking Me-262 with updated engines and safety equipment. The Me-262 carries a continuation of the original Work Numbers assigned during the war.

According to official Collingís information releases, the Messerschmitt Flight Program will present academic sessions on the aircraft, including safety training and cockpit orientation, before participants take to the air in the revolutionary WWII jet fighter. The flight itself will be tailored to each studentís interest and capabilities. In addition to the thrill of flying the Messerschmitt, there is the possibility of fighter runs on the Collings Foundationís B-17 Flying Fortress and B-24 Liberator. Each offers a perspective that no one has seen since WWII.

The Me-262 Projectís Sales and Marketing Representative, Gordon Page, explains ìWe have seen amazing interest from around the world bringing the Me-262 back to life. Now, a limited few will have the chance to participate in a collaborative effort of the Me-262 Project and the Collings Foundation. We are thrilled with the interest level that we have seen so far; people really want to experience flight in this legendary German fighter!î The Collings Foundation is offering tax-deductible donor positions for involvement into the ME-262 project. Only donors to the Collings Foundationís Me-262 project will receive flights. They warn that positions are limited.

Page further says, ìWe already have donors lining up to get 30 hours of instruction for a type rating in this historic aircraft- a feat that few will ever have a chance to add to their pilotís licenseî. For more information on how to participate in this historic program, please visit www.collingsfoundation.org or to secure a donor position please contact Rob Collings at 617.510.5237