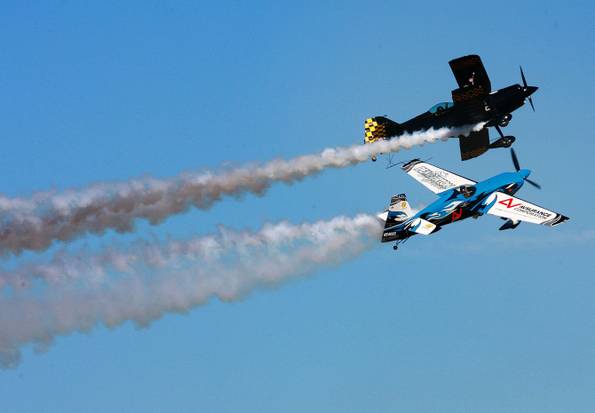 Some came to look back at their past, others came to glimpse into their future. No matter their motive, the thousands of people in attendance appeared to enjoy the Hemet-Ryan Air Show in California on Saturday.

The crowd spread out across the grounds of the Hemet-Ryan Airport, many in lawn chairs, others on blankets and some seeking shade under the wings of planes on display on a beautiful sunny day with temperatures in the low 70s. Vehicles even lined the intersection of Stetson Avenue and Warren Road, where people could see the action without the crowds.

Inside, Richard Marsh took a photo of his father, Ken Marsh, standing next to a torpedo bomber. The elder Marsh, 87, who lives in Hemet with his son, worked on that type of airplane while in the U.S. Naval Air Corps in the 1940s, but as a mechanic, he didn’t get into the air much. “I was on one right after the war,” Ken Marsh said. “I flew one time on the tail gunner, but I was too big. The pilot did a dive bomb simulation and I lost my lunch. Then I got out and fell off the wing.”

For the complete story by Craig Shultz of The (Riverside, Calif.) Press-Enterprise, click here.

Photo by David Bauman, The Press-Enterprise