Learning the Hard Way
Low-altitude combat in the P-40

October 1940: Off I go into the wild blue yonder! I was the oldest of six kids growing up in Tarboro, North Carolina, and enlisted in the Army Air Corps in October 1940. I was assigned to the Third Reconnaissance Squadron in Orlando, Florida, as an aerial photographer. I was a wide-eyed 18-year-old, and I learned quickly that the Air Corps was far from ready for war. We lacked pilots, mechanics, and airplanes as we sat back and watched other countries in Europe building up their military air army. 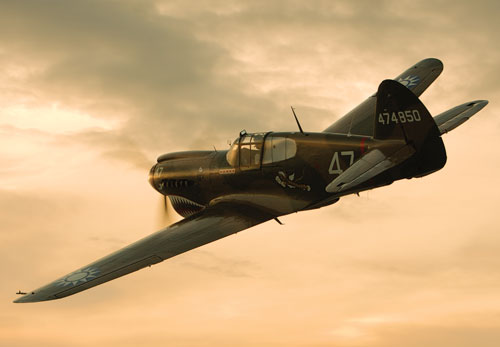 But the Air Corps knew that and instituted a program whereby, if you were already enlisted in the service, you could volunteer to learn to fly and bypass the college-degree requirements. If you earned your wings, you would be classified as a staff sergeant pilot—so that’s what I did.

After flying PT-17 Stearmans, BT-13s, and AT-6s, I earned my sergeant wings in October 1942 and was immediately assigned to the 324th Fighter Group, 315th “Crusaders” Squadron in Manchester, New Hampshire, where I checked out in a P-40 Warhawk. It was more than double the horsepower of the AT-6, and after my blindfold checkout, I learned quickly about getting your head out of the cockpit with 1,300hp roaring out in front of you. My instructor told me to take the Warhawk up to 10,000 feet, get to know the airplane by doing some gentle turns, then do some stalls with the landing gear and flaps down to get the feel of it. I got the feel of it right away—and it was all bad!

Download the article from the February 2016 issue of Flight Journal.

By Captain William Dave Gatling, USAF, Ret.
As told to and written by James P. Busha