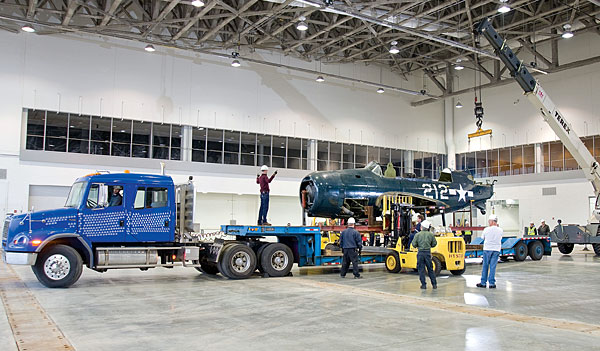 A Curtiss SB2C-5 Helldiver is the first resident in a new restoration hangar at the Steven F. Udvar-Hazy Center of the National Air and Space Museum (NASM) at Dulles International Airport in Virginia. The Helldiver aka “Beast” was transported from the Paul E. Garber Preservation, Restoration and Storage facility in Maryland; this facility will eventually be absorbed by the new hangar.

Once intended to be a replacement for the SBD Dauntless of Battle of Midway fame, the dive-bomber was dubbed the “Beast,” or the “Sonofabitch Second Class,” by crew members who saw the cantankerous SB2C as no improvement on its predecessor.

The museum’s SB2C (BuNo. 83479) will be restored to represent the Helldiver piloted by retired VADM Donald D. Engen. A lieutenant (j.g) on October 25, 1944, Engen led an assault on the Japanese aircraft carrier Zuikaku during the Battle of Leyte Gulf. The attack sent the mighty carrier to the bottom of the sea, and Engen was awarded a Navy Cross. He wrote of his naval aviation career in his memoir, Wings and Warriors. He went on to become the administrator of the Federal Aviation Administration and then NASM director before he lost his life in a 1999 glider accident in Minden, Nevada.

The new restoration hangar is a $15 million gift from Engen’s son, D. Travis Engen, former president of the international aluminum and packaging company Alcan. The hangar is named for Engen’s late widow, Mary Baker Engen. Constructed as a part of the Udvar-Hazy Center building, the hangar has a huge, open facility and will be viewable from above by museum visitors.

“The Helldiver has often been criticized unfairly,” said Joe Evon, a radioman-gunner with Bombing Squadron 8 (VB-8) in the Pacific in 1944. “It was a trustworthy aircraft, and it could bring you home from a battle.”—Robert F. Dorr