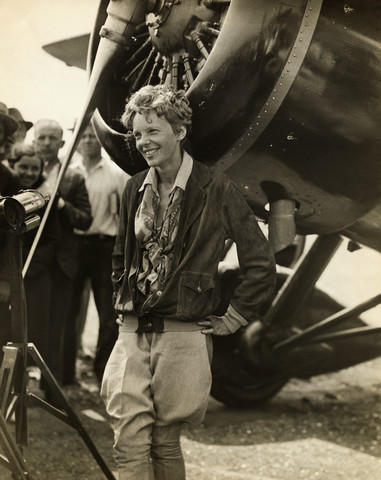 Wow! Have you heard the news? Evidence of Downed Plane Discovered in the Pacific. AP: Amelia Earhart, left, and navigator Fred Noonan pose with a map of the Pacific showing route of their last flight.

Some 75 years after Amelia Earhart’s  plane disappeared, a new discovery on the bottom of the ocean points to where the aviator may have  crashed — and died. (via tighar.org) A debris field videotaped in the waters off Nikumaroro Island could include remnants of the aviator’s plane — the latest batch of evidence in what has been an ongoing search for clues (see the most notable Earhart discoveries from the last 75 years). According to the International Group for Historic Aircraft Recovery (TIGHAR), “a review of high-definition underwater video footage taken during the recently completed Niku VII expedition has revealed a scattering of man-made objects on the reef slope off the west end of Nikumaroro.” Spearheaded by TIGHAR, the expedition began July 12 and used an Autonomous Underwater Vehicle (AUV) and a Remote Operated Vehicle (ROV) to scan for data and record hours of video footage. A TV special of the recent expedition aired Sunday night on Discovery. The team of researchers initially set out in search of large pieces of aircraft wreckage, TIGHAR’s executive director, Ric Gillespie, told Discovery News. But early investigations revealed that the underwater environment off the shores of Nikumaroro — known as Gardner Island at the time of Earhart’s journey — was more severe than expected. This difficult-to-navigate wreck site, paired with some early technical malfunctions, precluded any immediate announcements of major discoveries. Accordingly, Gillespie says, early media reports “rushed to judgment in saying that the expedition didn’t find anything.” (Okay, even NewsFeed admits guilt there.) But everything changed late Friday, when TIGHAR took to the web with the breaking news that its forensics imaging specialist Jeff Glickman had now examined additional high-definition video footage obtained near Nikumaroro and isolated specific artifacts resting on the ocean floor. Given this “debris field” of “man-made objects,” the bigger question now concerns whether or not these new images depict pieces of the same Lockheed Electra aircraft portrayed in the famous photo taken off Nikumaroro’s western shore in October, 1937 — three months after Earhart and her navigator, Fred Noonan, disappeared. According to Glickman, several of the remnants — though considerably beaten up — do correspond to the 1937 photograph, shot by British Colonial Service officer Eric R. Bevington. Bevington’s image frames four key components of the doomed plane: a strut, a wheel, a wom gear and a fender. As told to Discovery News, TIGHAR’s new images seem to reveal the same fender, as well as possibly the wheel and some portions of the strut. The next step of the investigation involves collection and analysis, which TIGHAR hopes will eliminate all doubt as to the debris field’s authenticity. Thus far, the researchers have examined less than 30% of the new data collected between July 12 and July 24. (Thanks to the initial roadblocks encountered, the team logged only five days of search time during the 12-day journey) The expedition — which cost TIGHAR a reported $2.2 million — marks the ninth the group has led.