The airplane had barely been invented when the daring new breed of men known as “pilots” began stretching the airplane’s purpose and the public’s imagination. Appa­rently seeking a place in the public’s eye, they began trying to outdo one another in distance and speed. Harry Atwood, of Boston, Massachusetts, took a slightly different tact, however. He took his place in history’s fact book by going places no plane had gone before, which guaranteed headline status for his exploits.

A graduate of MIT, Atwood took up flying in the spring of 1911 at the Wright Brothers’ flying school in Huffman Prairie, Ohio, and barely a month later performed his first stunt. He flew his Wright Model B, 108 miles from Squantum, Massachusetts, to New London, Connecticut. He made the trip in a then-astounding two hours, considered a nearly impossible speed back then. Atwood then flew from New London to New York City, 145 miles away, in 2 hours and 47 minutes. A few months later, while still a newbie airman, he flew 1,256 miles from St. Louis, Missouri, to New York City, making 11 stops and flying more than 28 hours. The man had no fear! The machine knew no limits! Or so thought breathless newspaper readers nationwide.

When in New York, he couldn’t help but notice the number of landmarks that would present newspapers with outstanding photo ops. Take Lady Liberty, for instance. Circling the Statue of Liberty gave his public yet another image of him doing what they doubted any sane man would do.

But greater fields beckoned. What about the nation’s capital? There were landmarks aplenty there. So Atwood announced his intention to circle the famous buildings of Washington, D.C., and on July 7, he took off from Atlantic City, New Jersey (bear in mind, he had only been flying a few months). He had a passenger with him this time: fellow aviator, Charles K. Hamilton.
On July 10, they reached Baltimore, at 9:38 a.m. Atwood and Hamilton might have flown on to the College Park, Maryland, airport near Washington right then, but they found the area’s notorious summer weather so hot and humid that they cut the flight short. Atwood said that the summer weather was so bad that he described it as “bordering on the inferno.”

Atwood finally set off, by himself, the evening of July 13. When he was spotted over D.C., huge crowds came out, many heading for the Washington Monument. Atwood first circled the Monument. After that, it was a turn of the White House, the Capitol, the Smithsonian Castle, Poto­mac Park, and the Virginia shoreline, with additional trips to the Monument in between, circling, diving, and ascending. Spectators remarked how striking the plane looked in the glow of the setting sun. Eventually, Atwood flew back to College Park.

One person who missed the fun that day was President William Howard Taft, who was out golfing at Chevy Chase, Maryland. The next day, however, Atwood landed on the White House lawn and, with his mother, met the president. Taft personally congratulated Atwood and gave him a gold medal from the Washington Aerial Society.

Even though Atwood was the last pilot invited to land on the South Lawn, he wasn’t the last to visit it in an aerial fashion. In 1974, 20-year-old PFC Robert Preston, despondent over being washed out of flight training, took a joyride in an unsecured UH-1 Huey and, after leading government helicopters on a wild chase, landed on the White House lawn in a hail of bullets, which barely scratched him. Then, in 1994, Frank Corder, a drunk (and high) truck driver, stole a Cessna 150 and dove it into the South Lawn barely missing a corner of the White House. Today, any unofficial aerial visitors will be greeted by a wide variety of antiaircraft missiles. Presidents (and the Secret Service) now take a dim view of uninvited pilots violating their privacy.  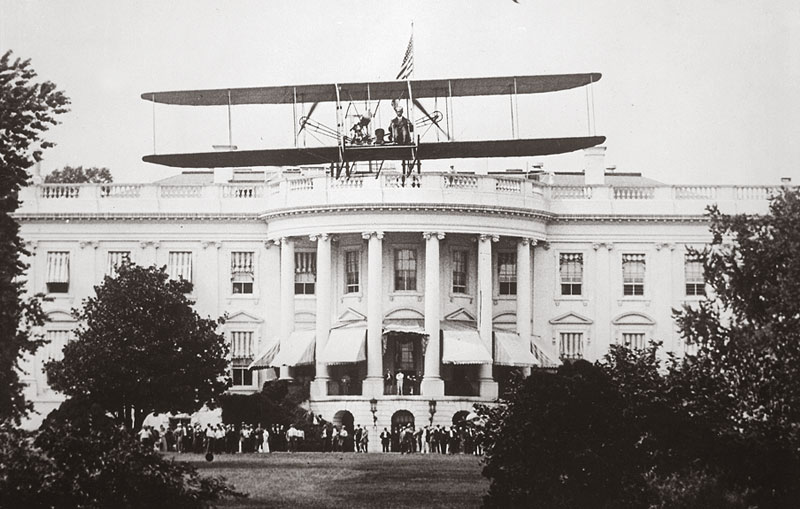