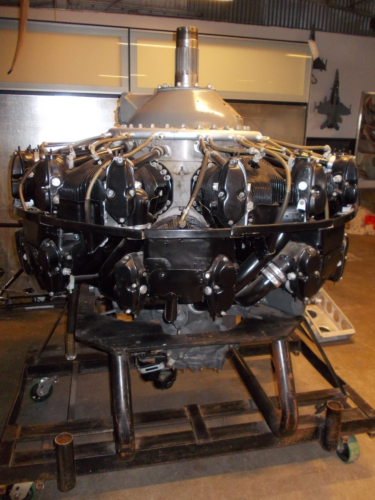 Greatest Generation Aircraft,  a Fort Worth, Texas-based foundation that operates a pair of World War II aircraft, will host a charity auction on Saturday, March 2, from 9 a.m. to noon, at the Vintage Flying Museum hangar at 505 NW 38th Street.

Among the many unique items set to roll across the auction block is a Cyclone radial engine overhauled in 1942 for installation in Pan Am’s China Clipper (shown above). There also will be a collection of WWII aircraft-inspired art, artifacts and collectibles, classic aircraft parts, such as a B-17 Flying Fortress cowling, vintage motorcycles and much more.

Auction proceeds will benefit Greatest Generation Aircraft’s restoration and maintenance efforts of several vintage military aircraft, including the North American B-25 Bomber “Pacific Prowler,” the Douglas C-47 “Southern Cross,” and the Douglas A-26K “Special Kay.”  Greatest Generation Aircraft is a 501(c)3 non-profit foundation that restores vintage military aircraft to their original flying condition.  These aircraft are then used to educate the general public to the roles they played in our country’s history, as well as pay tribute to the veterans that crewed these aircraft.

Bidder pre-registration is encouraged, but not required. To pre-register, send your name, address and cell phone number to greatestgeneration@yahoo.com.  You will receive a bidder number in return and may pick up your bid card at the check-in table upon arrival. A preview of the items to be auctioned will be held on Friday, March 1, 3-6 p.m. and Saturday, March 2, 7-9 a.m.