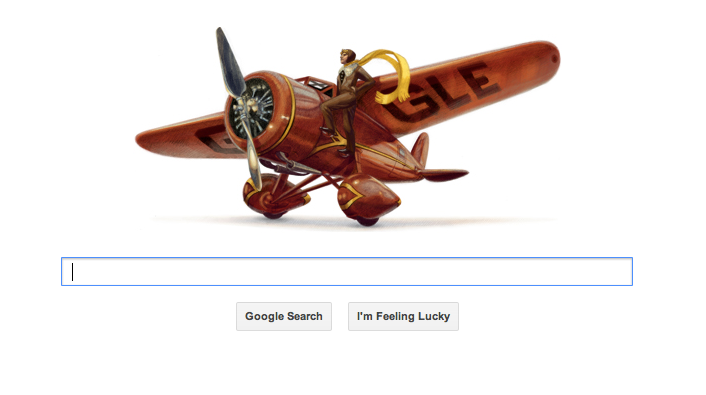 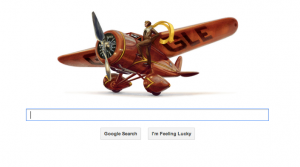 Today, Google honored Amelia Earhart, by making today’s Google Doodle an image of Earhart and her plane.  Today marks the 115th birthday of the first women pilot to cross the Atlantic Ocean by herself.

In 2012, one type of search for Amelia Earhart is getting results.

Google on July 24 paid tribute the the female aviation pioneer, famous for being the first woman to fly solo across the Atlantic in 1932, with a Google Doodle on the search engine’s home page. The day would have been the pilot’s 115th birthday.

The Doodle depicts Earhart, scarf whipping in the wind, standing near the door of a Lockheed Vega 5b, the plane she flew for her famous trans-Atlantic flight according to The Guardian. The actual aircraft she used sits today in the Smithsonian National Air and Space Museum.

Born in 1897 in Kansas, Earhart first flew across the Atlantic as part of a three-person flight crew in 1928, following in the footsteps of aviation great Charles Lindbergh,according to the biography on her official website. Four years later, she manned a flight from Newfoundland to Wales by herself, becoming the first female pilot to pull off a solo trans-Atlantic flight.

Her feats earned her instant notoriety. She met with both Presidents Calvin Coolidge and Herbert Hoover, conducted a lecture tour, and became one of the first celebrities to endorse a line of clothing. (Celebrities of yore aren’t that different from today’s.)

But her most famous — or infamous — flight came in 1937, as she attempted to become the first woman to circumnavigate the globe by plane. “I have a feeling that there is just about one more good flight left in my system, and I hope this trip is it,” Earhart said according to her bio.

However, she and navigator Fred Noonan never finished the historic 29,000-mile flight around the world. After completing a majority of trip, starting in Miami and flying east, radio operators lost contact with her plane over the Pacific Ocean, as she tried to fly to Howland Island from New Guinea. An extensive search effort failed to find the craft, and Earhart’s fame continues to be bolstered today by theories populating the Internet about what crashed her plane (or whether it was really downed).