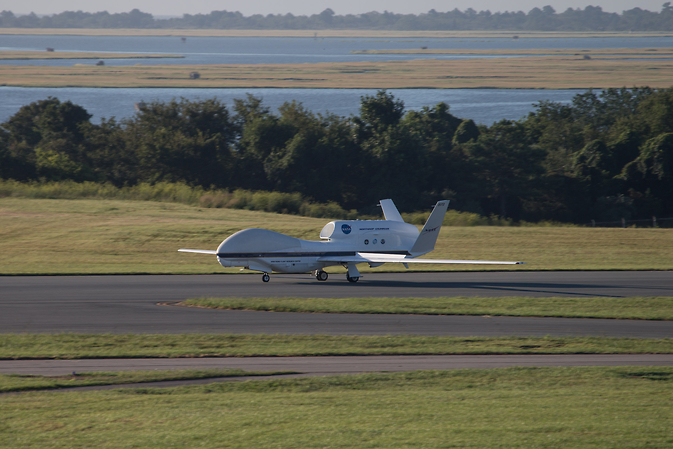 Story and photo by NASA

NASA’s airborne Hurricane and Severe Storm Sentinel, or HS3, mission returns to NASA Wallops for the third year to investigate the processes that underlie hurricane formation and intensity change in the Atlantic Ocean basin. HS3 is a collaborative effort that brings together several NASA centers with federal and university partners.

The two unmanned Global Hawks participating in HS3 are based at NASA’s Armstrong Flight Research Center at Edwards Air Base, Calif., but will be temporarily housed at NASA Wallops for the duration of the HS3 mission which runs through Sept. 29. That window for the mission coincides with the peak of the Atlantic hurricane season that runs from June 1 to Nov. 30.

NASA Global Hawk 872 departed NASA Armstrong on the morning of Aug. 26 and arrived at NASA Wallops at 7:43 a.m. EDT on Aug. 27. Global Hawk number 871 is scheduled to fly to Wallops within a week.

Tropical Storm Cristobal became a hurricane late on August 25 as it was moving through the Bahamas. During the Global Hawk’s 22 hour mission it flew a “lawnmower” or back and forth pattern over Hurricane Cristobal while gathering data using dropsondes and two other instruments. There were 83 dropsondes loaded in the aircraft, with two of them were dropped over the Gulf of Mexico and the other 81 dropsondes dropped over Cristobal.  A dropsonde is a device that measures winds, temperature, pressure and humidity as it falls from the aircraft to the surface.

“The instruments are tested and then integrated onto each Global Hawk at Armstrong,” said Marilyn Vasques, HS3 Project Manager of NASA Ames. Before the cross-country flights, the ground operations center at Wallops tested the various instruments aboard both aircraft while they were still at Armstrong. “After integration and outdoor tests we conduct a Combined Systems Test on the ground as well as a test flight near Armstrong before the instruments and aircraft are ready to transit” explained Vasques. Checking the performance of the instruments over that long distance while they were at a NASA center was critical to ensure they would operate correctly while in-flight over Atlantic hurricanes.

“Twice a day we hold weather briefings looking for storms or disturbances that could become storms,” said Scott Braun, HS3 Principal Investigator from NASA’s Goddard Space Flight Center in Greenbelt, Maryland, working at Wallops during the mission. “We evaluate the targets in terms of our science objectives and determine which one best addresses those objectives. We factor in stage of the life cycle of the storm, likelihood of formation or intensification, interaction with the Saharan Air Layer, among other things.”

During the mission period, the Global Hawks will be operated from Wallops where they will depart and fly over tropical cyclones in the Atlantic, analyzing the storms with six scientific instruments. The East Coast NASA location makes accessing Atlantic tropical cyclones easier and allows for more science data collection than if they were to fly from the West Coast. Each aircraft has an 11,000-nautical-mile range and can fly for up to 26 hours.

One Global Hawk will carry three instruments to examine the environment around the storms, including the Scanning High-resolution Interferometer Sounder (S-HIS), the Advanced Vertical Atmospheric Profiling System (AVAPS), also known as dropsondes, and the Cloud Physics Lidar (CPL).

The HS3 mission is funded by NASA Headquarters and overseen by NASA’s Earth System Science Pathfinder Program at NASA’s Langley Research Center in Hampton, Virginia. It is one of five large airborne campaigns operating under the Earth Venture program.