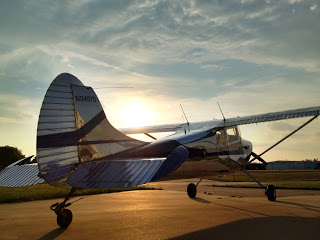 If you still don’t know what to give that hard-to-buy-for youngster in your life, then consider this suggestion: an airplane ride. Nope, not a trip aboard a commercial airliner, as long lines, invasive security and indifferent customer service have pretty much sucked all the fun out of that experience. I’m talking about flying on an honest-to-goodness Cessna or Piper or Beechcraft…you know, a plane.

If you, like me, first took to the skies aboard one of those fascinating little aircraft, then you already know why an introductory flight is a great gift. For those who don’t, well, read on.

Saturday afternoon in North Texas was mostly sunny with shirtsleeves temps and hardly any wind. It was good weather for flying, especially for someone who’d never flown in anything but a jetliner, as was the case for Conner, my best friend’s teenager who stayed with my wife and I while his parents were out of town.

The two of us went to Northwest Regional Airport, known alternatively by many from its clumsy FAA designator of 52F but by even more as the place where a Cessna 172 Skyhawk hit an errant SUV last month. Regardless, it’s the home of some great pilots and some great airplanes. One of 52F’s many tenants is Dan Linn’s Cessna 170B, a gorgeous taildragger that would be taking us to an even smaller, but equally intriguing field called Propwash Airport (16X to the FAA). We were heading there to check out some warbirds and an in-progress Ryan ST-A project.

We began the visit when Dan took us on an enlightening tour of a few hangars spread around Northwest’s 3,500-foot runway. I’m pretty sure Conner was quite surprised to see what one of those tall, sheet-metal buildings could hold inside it. After all, where else but a hangar could you find a Van’s RV two-place taildragger sitting next to a sleek Globe Swift with a classic Model A coupe in a well-equipped shop behind them? Yep, I told him, hangars are the ultimate man caves and lots of ’em are just full of all sorts of cool stuff.

Eventually, the three of us made it down to the hangar where Dan keeps his ’56 170B. It shares space with three other light planes, all Pipers. To be honest, it was the one that caught — and held — my eye after we pushed open the sliding doors. As Dan removed the covers from the gleaming metal wings, Conner quietly asked me what we were doing. “We’re gonna go flying,” I said.

Of course, I had prepped his parents beforehand about the possibility of taking Conner up, but I wasn’t sure it would happen until we got to 52F. As fate would have it, Conner’s dad gave me a ring just as Dan was pre-flighting N3467D; I said the trip was on and made sure it’d be OK to take his son on what I hoped would be the ride of his lifetime. Thankfully, his parents agreed and soon afterward, we were climbing into the Cessna.

We couldn’t have chosen a better pilot for Conner’s first light plane hop than Dan. Fascinated with flying since he was a kid, he followed that age-old ritual of so many private pilots by washing planes for their owners right here at Northwest. His taildragger experience began not long after he earned his private pilot ticket in 1991, first with a Taylorcraft and then in the Cessna. Dan, who works for Bombardier in an aviation-related position at DFW International Airport, even runs a classic aircraft blog and photographs them in his spare time. Needless to say, he loves flying.

He also knew Conner was new to the grassroots side of aviation, so he patiently explained what was happening in simple terms as we buckled in for the ride. As the newbie, Conner got to sit next to Dan while I relaxed in the back and enjoyed the view during the short taxi to Runway 17’s threshold.

Even with three guys aboard, the old gal lifted off the runway easily, then gained some altitude to clear some buzzards that can often be found around these parts. It didn’t take too long to get in the pattern at Propwash a few minutes later and that’s where I saw the look. As we made a tight banking turn from downwind into a short final, Conner looked back at me with a big grin on his face. It was that reaction those of us who’ve been there before have had…a look that truly expressed the fun of flight.

I had honestly forgotten that look. It’s been awhile since I’ve flown in anything that held less than 50 people and came with a flight attendant. Yet, when I saw Conner’s expression, a distant memory came back to me. I was lucky enough to have had a similar experience in my uncle’s Cessna 177 Cardinal when I was a kid a long time ago. I figure that’s why I’m still fascinated with aviation today.

While it’s much too early to tell how Conner’s first flight on a light plane will affect him as he reaches adulthood, I’m sure it’ll be a fond memory, just as those first flights were for Dan, myself, my uncle (who even in retirement from corporate piloting still flies a Pilatus PC-12 and a Gulfstream G-II for a wealthy individual) and countless others across the nation and around the world.

So, if you want to share your love of aviation (and why else would you be reading this if you didn’t?), consider an intro plane ride or discovery flight at your local airport. Here in the Dallas-Fort Worth Metroplex, such flights are very reasonably priced, especially compared to a gaming console or smartphone. If you have a pilot friend in your life, you might be able to arrange a ride that way, too; just be sure to offer some gas money. Most pilots are very willing to share their enthusiasm with the uninitiated.

It’s the kind of gift that both sparks something in young boys and girls and rekindles memories in adults, too.