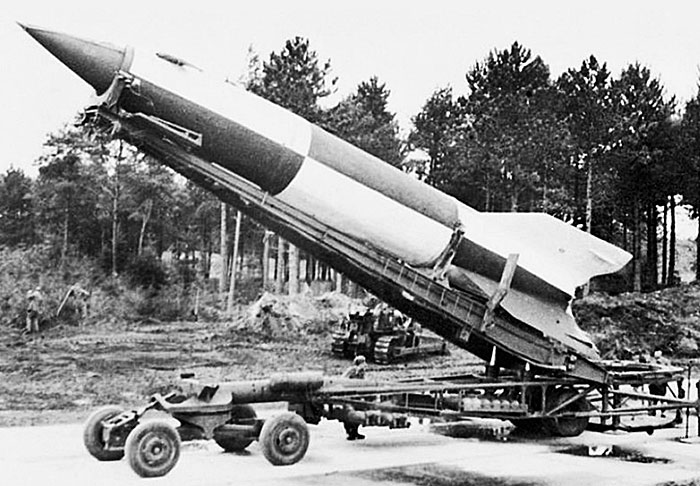 The German word was Vergeltungswaffe, which means “retribution weapon” but is normally translated as “vengeance.” Generically, the V program included a family of advanced concepts beginning with the V-1 cruise missile. The “buzz bomb” carried an 1,800 lb. warhead at around 400mph, but was susceptible to defending fighters and anti-aircraft guns. The V-2 was unlike anything that had ever flown—it arrived by surprise and was immune to any kind of defense.

The V-2 program’s leaders were General Walter Dornberger and Dr. Wernher von Braun. Dornberger, an artilleryman captured in WW I, saw the potential of rockets and pursued that goal from the early 1930s.

Born in 1912, von Braun was fascinated with rocketry and astronomy from childhood. He became a civilian employee of the Army Ordnance Department in 1932, and his doctoral dissertation examined the prospects of liquid-fueled rockets. He began working with then-Captain Dornberger, forming a lifelong alliance. After some success with small rockets, planning for the futuristic A-4 began in 1936.

At Peenemunde on the Baltic coast, Germany’s rocket program took shape. The team produced a workable design designated the A-4, but political setbacks occurred when von Braun was arrested for declaring his main interest was space travel rather than military use. Armament Minister Albert Speer had to spring the scientist.

The Chemistry of Terror

The heart of the A-4 was its propulsion. Steam produced by a hydrogen peroxide mixture drove fuel and oxidizer pumps. The fuel, an ethanol-water mixture with liquid oxygen as an oxidizer, was forced into a combustion chamber. At temperatures approaching 5,000 degrees F, the motor produced 25 tons of thrust, boosting the V-2 higher than ever.

On ignition, the rocket had fuel for about one minute of powered flight. Then gyro-controlled pitch and steerable vanes directed the rocket until engine shutdown provided the trajectory to the intended target. A maximum apogee of 50 to 55 miles was possible.

Evaluation began in March 1942 with nearly 900 tests at at Peenemunde and two sites in Poland. At length, the A-4 reached maturity, prompting Dornberger’s announcement:

“We have invaded space with our rocket for the first time. We have used space as a bridge between two points on the earth; we have proved rocket propulsion practicable for space travel. This third day of October, 1942, is the first of a new era of transportation, that of space travel.”

Achieving operational capability, the A-4 became the V-2.

Sitting on a pad, a V-2 was nearly 46 feet long with a launch weight of 27,600 pounds. Despite its maximum velocity of 3,500mph, its effective range was only about 200 miles. Therefore, launch sites were necessarily placed in northern France and the Low Countries, but in the three months after D-Day, Germany’s geographic options were limited. Fixed and mobile firing batteries supported the V-2 campaign, but both got an erratic start in September 1944. The early efforts in Belgium fizzled, but on the 8th, rockets exploded near Paris and London, inflicting damage. The RAF was quick to locate the firing batteries and attacked whenever possible, often through heavy flak.

Despite its sensational record, the V-2 remained an imprecise weapon, useful only against “area targets.” Those areas, of course, were cities—mainly Antwerp and London. Antwerp was the primary port supporting Allied forces on the European continent, and citizens who’d lived under German rule for four years had to endure the eerie experience of a supersonic bomb that arrived soundlessly before detonation.

The warhead was typically a metric ton of amatol, a combination of TNT and ammonium nitrate. Therefore, the V-2 was a poor bargain, offering minimal bang for the buck. The tremendous engineering and production effort to place 2,200 pounds of explosive somewhere within miles of an aim point represented poor return on investment.

Nonetheless, the missile’s terminal velocity was rated at some 1,700mph—over twice the speed of sound. Consequently, some London residents reported that they heard the approaching sonic boom after impact, though in most cases the noise had been lost in the explosion. Depending on the composition of the soil, a rocket’s crater might measure 60 feet wide by 25 deep.

A purely ballistic trajectory was more an exercise in probability theory than mathematics. However, a radio-controlled guidance system offering improved accuracy began tests in late 1943, eventually receiving in-flight data on velocity. The equipment proved workable, but did have limited range and could be jammed by Allied “spoofers.”