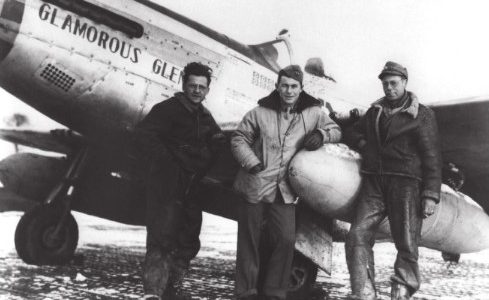 As we mourn the passing of an aviation legend, we share this article Gen. Chuck Yeager wrote for Flight Journal.

I shot down my first Bf 109 during the first daylight raid on Berlin by American B-17s on March 4, 1944. I was flying a P-51B with the birdcage canopy. The weather was extremely bad, and many of the B-17 groups had aborted, with the exception of a couple of boxes, as I remember. I only saw one other Mustang from our 363rd Squadron. Flying at 32,000 feet above the bombers, I spotted a lone 109 out to the side of the B-17s at 28,000 feet. I peeled off and told my wingman to give me top cover.
During the dive, I overestimated the 109’s speed and overshot. I pulled up in a big roll and came back in under the 109 at his speed and opened fire at about 100 yards. Only three of my guns fired in the beginning, and then only two, but it was enough to blow him up. Later I spotted an He 111K down low at around 12,000 feet. I went into a long dive and pulled up behind him and opened fire. Only one gun fired a few rounds and then quit. I flew near the 17s back to England, found my base and landed. It was not uncommon to have guns fail to fire on P-51B aircraft, or to have problems with the solenoids that controlled low or high blower positions, and the Malcolm canopy sure as heck did not solve these problems.
The next day, I was shot down in southern France. After working with the French underground for three months, I made it to Spain. Later, the U.S. traded gasoline to Spain for a few of us fighter pilots, and the British flew us from Gibraltar back to England. I was told I was being sent back to my squadron to train new pilots, but no combat.
While advance-training three new pilots, I was flying in a new P-51D with a K-14 gunsight, six .50-caliber guns and wearing a “G” suit, when I got a call from our operations officer, Maj. Hiro, asking if I had hot guns. As we always flew with hot guns, I replied that I did and that we had full internal fuel, about four hours. Maj. Hiro told me to take my flight on a northeast heading and look for a B-17 crew that had ditched their aircraft and were in a dinghy a couple of hundred miles out in the Channel. We were to find the crew and stay with them until a rescue boat found them. An hour later, we found the dinghy with the entire crew and buzzed them; they were quite happy. While circling the dinghy, I spotted a Ju 188 low on the water northeast of us, obviously looking for the B-17 crew to strafe it. I left two of my wingmen at the dinghy and headed for the Ju 188. I caught it about two miles later on the edge of an island. I put his wingspan in the K-14 sight, flipped on the gun switch, closed up to about 200 yards and opened fire. It was a thing of beauty. That 188 lit up like a Christmas tree and blew into a million pieces. The six .50-caliber guns, firing at 5,000 rounds per minute, never missed a lick. It was my first of many enemy aircraft shot down with the six .50-caliber guns. When we returned from the mission, I called Maj. Hiro and told him I had shot down an airplane. He screamed in the phone: “Damn it, Yeager! Can’t you do anything right? You are not supposed to fly combat. Gen. Eisenhower will court-martial us all! Bring your combat film up to headquarters and fill out an encounter report. We will use Ed Simpson’s name on the film, and it will make him an ace.” (Simpson was later shot down and killed by the Germans while fighting with the French underground.)
During the next six months, I shot down five 109s on one mission with 500 rounds and four Fw 190s with 160 rounds and an Me 262 jet with 150 rounds. I flew more than 50 missions and only saw enemy aircraft on five of them. It was a big sky, and the P-51D aircraft ruled the sky. The P-51D was the best fighter of WW II. I know because I got to fly them all after the War.
There are many P-51s in excellent shape flying today. I flew Jack Roush’s Glamorous Glen III, Gary Honbarrier’s Glamorous Glen III and Mark Huffstuttler’s Glamorous Glen III (the only remaining one). They are beautiful aircraft. I have flown with Jack Roush a few times. He is pretty well self-taught and does an outstanding job with the P-51—never “cowboying” or doing stupid things. 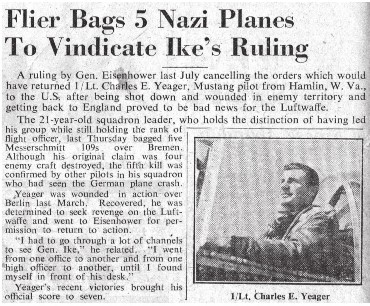 Readers may be interested in the above article that was published in the Stars & Stripes newspaper in October 1944.