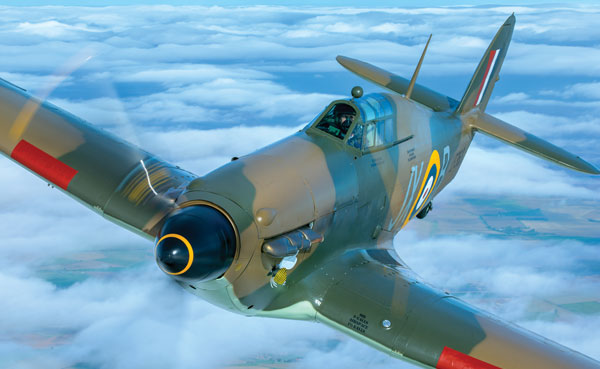 The Overlooked Warrior
by Barrett Tillman

Nearly 20 years after WW I, the RAF still flew biplane fighters. Consequently, the Hawker Hurricane made its mark as Britain’s first monoplane fighter, heralding a new era in military aviation.
Designed by Sir Sydney Camm and first flown in late 1935, the Hurricane featured a thick airfoil that provided excellent lift at the expense of greater drag. The airframe was a steel tube structure both easier to manufacture and repair than the monocoque Spitfire. Early press reports gave the public an optimistic impression of the new fighter. No. 111 Squadron received the first Hurricanes in late 1937, and the CO’s record for the 327 miles from Edinburgh to London in 48 minutes yielded an astonishing 408 mph. However, the heavy tailwind gave the squadron leader the nickname “Downwind Gillan.”
Twenty nine Hurricane units represented nearly half of Fighter Command strength during the Battle. Spitfires, Bristol Blenheims and Beaufighters plus Bolton Paul’s Defiant made up the balance. However, Hawker pilots claimed 55 percent of all credited victories during the Battle, with four rating among the seven triple aces.
The Mk II variant became a potent fighter-bomber with four 20mm cannon and a pair of 250- or 500-lb bombs. The type fought a global war in North Africa, Italy, and Southeast Asia, remaining operational at war’s end.
More than 14,500 Hurricanes were produced through 1944, including those built in Canada. Several hundred Hurricane’s were modified for naval use, bridging the gap between biplane carrier fighters and the high-performance Seafires and Corsairs.
The most innovative use was aboard Catapult Aircraft Merchant ships to launch a Hurricane on a one-way sortie to intercept German bombers at sea. In 1941-43, nine CAM vessels launched fighters that downed nine bombers with one pilot lost.
Beyond the British Commonwealth, Hurricanes flew with nations as varied as Belgium, Russia, Finland, and Portugal.
The Hurricane led to successive Hawker fighters, notably the Typhoon (operational in1941), Tempest (1944), and Sea Fury (1945). Camm’s postwar designs included the Hunter (1954) and Harrier (1969) which still flies operationally today.
Currently, a dozen Hurricanes are listed as airworthy in Britain, the U.S., Canada, and France. The Hurricane’s “office” was notably roomier than the Spitfire’s but used the same central panel of essential instruments including ASI, altimeter, vertical speed, artificial horizon, turn and bank, and gyro compass.
(Photo by John Dibbs/planepicture.com) The bare bones beneath the fabric: a Hurricane fuselage under restoration including the unique center section with multi-faceted tubes top and bottom. (Photo by John Dibbs/planepicture.com)