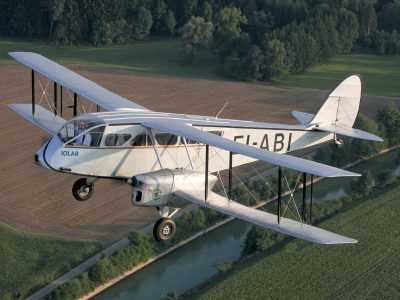 Many British and Commonwealth air routes were established by airlines using de Havilland’s 6-passenger seat, twin-engine biplane, the DH84 Dragon. The Dragon’s first flight (November 1932) pre-dated the better-known DH89 Dragon Rapide (or Dominie in military service) by two years, although both aircraft made their maiden flights at the DH airfield of Stag Lane in north London.

Purpose-built for a profit

Several airliners have been designed and built following a request from an airline executive for a certain specification. So it was with the Dragon: Edward Hillman, founder of the UK’s Hillman’s Airways, asked de Havilland for a twin-engine aircraft, larger than the four-passenger DH83 Fox Moth, and economic to operate, with which to open a scheduled passenger service from London (Croydon) to Paris. The twin 130hp Gipsy Major engines consumed 13 imperial gallons of fuel/hour, each passenger was also allowed 45 pounds of baggage and the Dragon Mk.2 cruised at 114mph, 18mph faster than the Fox Moth. de Havilland claimed it was the world’s first multi-engine transport that could pay its way without subsidy.

A total of 115 Dragons were built by de Havilland between 1932 and late 1936 at both Stag Lane and Hatfield. An additional 87 were built at Bankstown, Sydney, Australia, between 1942 and 1943 for use as navigational trainers with the RAAF. An estimated 66 of those built in the UK were exported to Africa, Australia, Canada, India, and New Zealand, plus some for the Iraq Air Force, Danish Army Air Force and Portuguese Air Force.

One airline that used the Dragon to inaugurate its first scheduled passenger service was the Irish Aer Lingus Teoranta. With a Dragon (G-ACPY) leased from Blackpool & West Coast Air Services (part of another famous 1930s British airline, Olley Air Services) Aer Lingus’ first service was flown on May 27, 1936 between Dublin (Baldonnel Military Aerodrome) across the Irish Sea to Bristol (Whitchurch). The aircraft was registered EI-ABI and named Iolar (Eagle). It flew with Aer Lingus until February 1938 when it was returned to Olley and the airline acquired the larger and faster Dragon Rapide named Iolar II. In the meantime Aer Lingus had also added a four-engine DH86A.

Reborn again. And again.  And …

In 1967, Aer Lingus purchased a derelict Dragon (ex G-AECZ and EI-AFK), painted it in the colors of the original Iolar and used it for publicity when the airline’s first Boeing 747 Jumbo Jet was delivered to Dublin in 1971. It was then displayed as a static aeronautical exhibit in the Departures Hall at Dublin airport. With the 50th anniversary of Aer Lingus pending in 1986, airline engineer John Molloy suggested that the Dragon be “rescued” from the terminal, restored, and flown again as part of the anniversary celebrations. John and Brendan O’Donoghue led a team that successfully put this aircraft, now re-registered EI-ABI (the same as the 1936 original), back in to the air. It flew between 1986 and May 1991 on airline promotional work. It was re-restored again in time for the 60th anniversary in 1996 and remained active until November 2004, when it was put into storage in one of Aer Lingus’ hangars at Dublin airport. In December 2009, airline CEO Christoph Mueller decided the Dragon should be returned to the air for the airline’s 75th anniversary in May 2011. John Molloy, who was now retired from Aer Lingus and had also restored a 1930s BA Swallow monoplane, agreed to coordinate the work. Aer Lingus transferred the Dragon in to the ownership of the “Aer Lingus Charitable Foundation.” After this latest, and most thorough restoration, Iolar took to the air again on February 24, 2011.

During 2011, 2012 and 2013, Iolar has flown extensively throughout Europe promoting Aer Lingus at weekend air shows and fly-ins where it is flown by volunteer crews whose day job is usually in the left-hand seat of an Airbus A320 or A330.

Words and photo by Geoff Jones