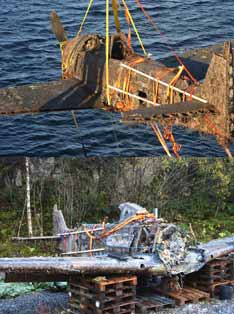 December 15, 1943 Fw-190A2 ‘Yellow 16’ took of from the airfield Herdla in Norway. Shortly after takeoff, the pilot  experienced engine trouble and had to make a controlled emergency landing on the water near the village of Solsvika west of Bergen. Almost 63 years later, on November 1, 2006, the aircraft got air under its wing again, when it was raised from a depth of 60 meters after a 5 hour recovery operation.

Local enthusiast knew about this aircraft but the Royal Norwegian Navy vessel KNM Tyr first plotted the exact location on May 11, 2005. The enthusiast formed the “Working Group Fw 190 A2 – Gelbe 16” and began preparations to raise the wreck from the water. Connections with local museums was established and the group gained a mandate from the Norwegian Defence Museum regarding handling and administration of the aircraft which would see it recovered and eventually displayed at its former airfield of Herdla in connection with Herdla Museum.The Working Group was formed by: Geir Tangen, Halvor Sperbund, Ole SÊlensminde, Svein Ove Agdestein, Olav Helvik and Ivar Nordland.

Between May 2005 and June 2006 units from Royal Norwegian Navy led by LtCdr Wiggo Korsvik (Mine & EOD Diving Command with assistance from Royal Norwegian Navy Diving School) conducted several diving expeditions to the aircraft to discern the condition of the wreck and the surrounds in preparation for the lifting of the aircraft. To prevent theft and to gain a picture of the quality of the wreck, the two MG17 guns, along with some cockpit equipment and hatches were recovered. Activity also included the mounting of lifting equipment on the aircraft. From June until September a civilian diving team led by Mr Didrik Venge completed the remainder of the work to rig the aircraft.

Wednesday November 1, the aircraft was raised. The operation went exactly as planned. The aircraft was lifted onto the former ferry Flekker¯y and transported to the Naval Base Haakonsvern near Bergen. The Naval Base will be hosting the Working Group whilst cleaning and preservation is undertaken up until March 2007. The aircraft will be separated in 6 ñ 8 main components and place in containers with fresh water to prevent corrosion. When the aircraft parts are cleaned and preserved they will be transported to Herdla museum to make a static display as it is today. There is no plan at the moment to restore the aircraft.

Fw190 A-2 werk.nr.5425, ëYellow 16í served with 12./JG.5. The pilot was rescued by local fisherman and handed over to German authorities, which in turn released a prisoner held for illegal use of a radio. Several Werk nr have been found on the parts recovered so the actual Werk nr is still open for question. It also have had several tactical markings like, two times Black 6 and one white number before servicing as Gelbe 16, indicating an old war horse that had served with several units. One of the black 6 numbers may be from its time from 11./JG 5 at Sola where it had a accident and had to go through extensive repair. The pilotís name is at the moment not known but several sources indicate that Kurt Kundrus of 12./JG 5 was the pilot of Gelbe 16 that day. He was later killed while flying with JG 3. The group is looking for information and history regarding 12./JG in Norway, and any help on this matter will be greatly appreciated.