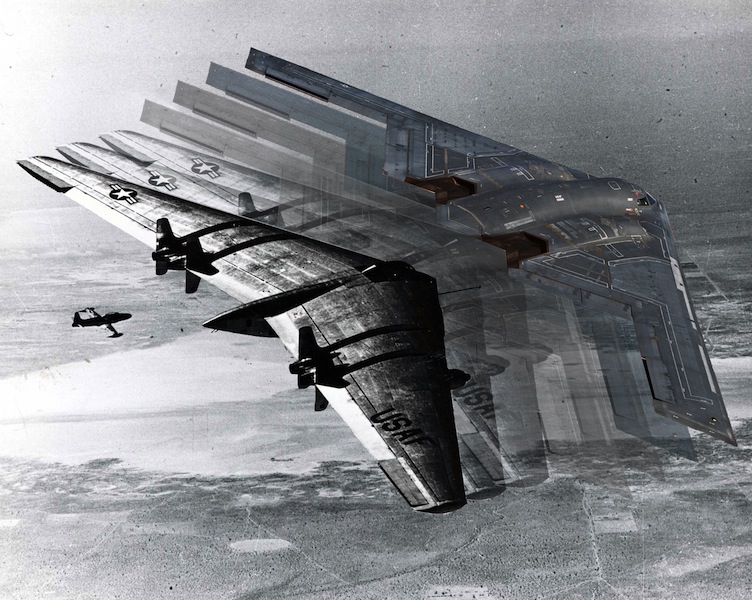 Sixty-five years ago yesterday, the flight test community suffered a tremendous loss June 5, 1948, when the Northrop YB-49 broke apart mid-air in the skies over the Mojave Desert. The jet-powered flying wing, crashed just five miles north of the base.

All five crew members lost their lives that day, including Californian, Capt. Glen Edwards who was flying as co-pilot with Maj. Daniel Forbes Jr. At the request of retired Maj. Gen. Albert Boyd (then Col. Boyd) Muroc Air Force Base was redesignated Edwards Air Force Base, Dec. 8, 1949 in honor of the young captain’s heroism and sacrifice.

According to retired Brig. Gen. Robert Cardenas, who served as the chief test pilot on the YB-49 program, Jack Northrop’s vision of the flying wing was a revolutionary concept; it was just too advanced for 1940’s technology.

In November 1948, Cardenas appeared before Jack Northrop and the General Officer’s Board to share his perspective on the controversial program.

“When I appeared before the board, I told them Mr. Northrop’s concept is going to give you one of the most potent weapon systems you’ve ever had. But, the YB-49 has exceeded the human sensory and response capability because we humans are reactive. This aircraft needs a proactive system and I don’t know what it is,” said Cardenas.

The insight Cardenas brought to the board included his experience learned during the stall series of Phase II testing and the tumble which resulted after his first attempt.

“As I entered my first stall, I was using the trim tab. Instead of a normal stall, it gave a serious lurch forward and went into a full negative tumble,” said Cardenas.

At the time, there were no computers, no ejection seat or pod – Cardenas had no other option but to maneuver out of the tumble.

“The situation I was in, the negative g-forces had me pinned off the seat and I couldn’t jump down, all I had left was to apply asymmetric power with four engines and that would cartwheel me. If I cartwheeled, it would probably throw me into a spin that I could get out of. That’s what I did. That was the only thing I had left since we didn’t have seat ejection,” said Cardenas.

“Now, Major Forbes was with me and he saw what I did, he was my co-pilot during Phase II testing. When they crashed, if he was flying it, why he did not do the same thing, I don’t know. In their case, the tumble got pretty severe and they lost the outer wing panels. The only thing left was the center section.”

The YB-49 program was cancelled, but Cardenas recommended to the General Officer’s Board that they should not give up on Northrop’s vision; rather they should invest in long-term research and development, to give technology a chance to play catch up.

While Cardenas’ recommendation was declined, technology eventually caught up and led to the design and development of the B-2 Spirit stealth bomber.

“We just needed computers to catch up with the flying wing design to capitalize on those things Jack Northrop was originally after; increased range, decreased drag, and the ability to carry everything internally. Computers were pivotal in the design of the aircraft itself, putting it in the air, stabilizing it, and performing the mission.” said Maj. Adam Goodpasture, B-2 flight commander, 419th Flight Test Squadron.

“I view [the B-2] as Jack Northrop’s original vision finally realized due to advancements in technology. The sacrifices of the crew and their families and the work put into testing the YB-49 left a legacy that is evident today in the Spirit – the world’s most lethal aircraft. Thank you,” Goodpasture said to Cardenas.

Nearly 40 years after the last flight of the YB-49, the concept of the flying wing became one of the Air Force’s greatest assets.

“The deterrence piece of the B-2 is not only our conventional and stealth capability, but our ability to carry nuclear weapons. It’s a very powerful, strategic deterrent for our country. We treat that very seriously to include the development of future capabilities,” said Goodpasture.

Today, the men and women of the 419th FLTS work to keep the stealth bomber on the cutting edge of technology.

“Once computers came in, it resolved a lot of problems. I was right when I told the generals they would someday have a formidable weapon system, I’m glad they didn’t let the idea die, the B-2 is a beautiful bird,” said Cardenas.

“And it’s good to keep remembering the past because otherwise you may make the same mistakes again.”