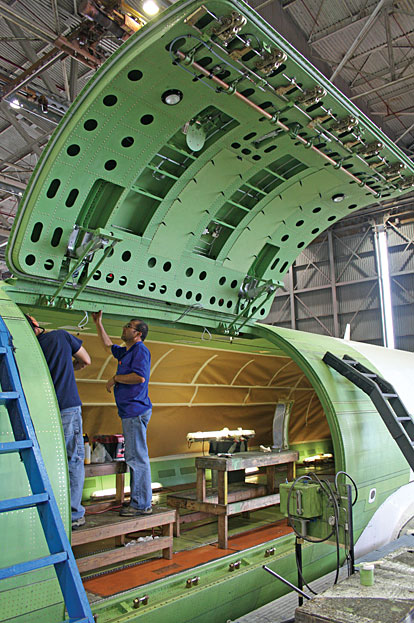 As the world’s fleet of aging Boeing 727 and DC-8 freighters needs replacement, up steps Miami-based Aeronautical Engineers, Inc. (AEI). AEI has been converting out-of-time passenger airliners at Miami since 1958, and to date has converted more than 350 different aircraft to carry the world’s air freight. Conversions of older Boeing 737-200s, 300s and 400s are now AEI’s bread and butter, plus their new project, which will be completed by July 2011, the certification of the MD-80 freighter conversion.

AEI is located at Miami International Airport in associate company Commercial Jet Inc.’s facility, sandwiched between the old Eastern Air Lines headquarters and Pan Am building. Its workload saw a significant upturn in 2010, mirrored in Boeing’s recently released World Cargo Forecast 2010/11, which shows that air cargo traffic has rebounded strongly and that the world freighter fleet will increase to 2,967 aircraft from 1,755 over the next 20 years. AEI hopes that a significant proportion of these freighter aircraft will come from its shops.

As the availability of retired passenger B737-300s has increased, AEI added to the 120 Supplemental Type certificates (STC) that it developed with its own specialized conversion for a 9-pallet 737-300, a unique configuration to maximize the interior volume by addition of a ninth main deck full ULD position. Current cost of a 737-300 conversion is about $2.4 million and a 737-400 about $2.7 million. All the cabin interior is stripped, a cargo door hole cut and surrounding fuselage reinforced, floors reinforced, fireproof bulkheads installed, and a new cargo door fitted with its own separate hydraulic system. Most customers also have a major maintenance overhaul completed while the conversion work is in progress. A cargo conversion takes up to 90 working days depending on the “depth” of work required. Recent AEI customers include MNG Airlines of Turkey, Sideral of Brazil, FlyAnt Cargo of Spain, NAC (Safair) of South Africa and Cargoair and Air Vega of Bulgaria.—Geoff Jones