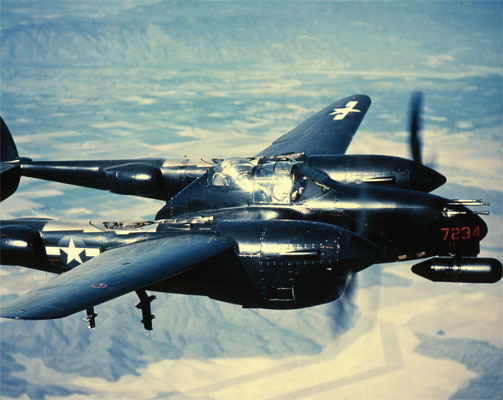 There’s the P-38 Lightning known and loved by generations — a large, yet lithe twin-engine, twin-boom fighter with an informed sense of streamlining that inspired descriptions like “three bullets on a knife.” The P-38 marched through the war generating alphabetical models through “M” totaling around 10,000 copies.

But it would be facile to leave the Lightning at that. The P-38 was a product of creative, yet disciplined thinkers like Kelly Johnson. How ironic that the elliptical twin tail appearance of the dumpy Hudson bomber was an icon of grace and style when applied to the P-38 and even the swooping Constellation airliner. Johnson’s P-38 team tweaked those signature tail shapes into something that followed slender booms radically housing the turbo-superchargers that gave the Lightning its punch at altitude. Modern tricycle landing gear, centrally mounted armament, and propellers rotating in opposite directions against the norm telegraphed the P-38 team’s willingness to innovate.

Not only could the P-38 deliver on its promise as an aggressive fighter, but serendipitously its large airframe gave the Lightning adaptability and flexible mission possibilities unattainable in smaller pursuits like the contemporary Bell P-39 Airacobra.

If the innovative Lightning design was promising enough to earn lucrative prewar orders for Lockheed, the eager P-38 team soon learned sobering lessons from testing as well as combat when war began. A variety of factors made the time ripe for experimenting with one-off Lightning variants to address technical and tactical problems. The United States entered a global war of unknown length in 1941. Americans euphemistically spoke of wartime necessities “for the duration,” the impossible-to-calculate length of the war ahead. In that atmosphere, the creative designers of the P-38 were both encouraged and compelled to experiment with their product to optimize its contributions to the ultimate Allied victory. Lt. Gen. Jimmy Doolittle endeavored to winnow out P-38s and even B-24s from his mighty Eighth Air Force in favor of P-51s and B-17s. Yet there is a curious kindred adaptability shared by both of the capacious airframe types that Doolittle shunned, while P-51s and B-17s strayed less from their one primary mission. Both Lightnings and Liberators ended the war with a reputation for adaptability.

Embracing an aircraft that was both fast and big, Lockheed set about taming the P-38’s foibles and expanding its résumé.

To read more, open the PDF by clicking the link: https://www.flightjournal.com/wp-content/uploads/2014/06/Fork-Tailed-Oddball.pdf?746277