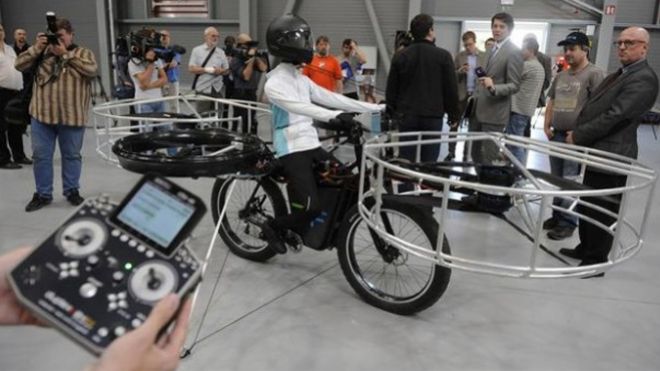 Cycling through heavy traffic can be a risky affair, with vehicles jumping from lane to lane without warning, and pedestrians appearing from nowhere as they risk life and limb to get from one side to the other.

It’d be so much safer if you could avoid these hazards by simply flying above them, while keeping an eye out for low bridges and power lines, naturally. The idea of a flying bicycle may sound a little far-fetched, but in the Czech capital Prague on Wednesday a group of local companies – including Technodat, Evektor and Duratec – gathered to test out a prototype of such a machine.

The bicycle, which has been in development for a while now, stayed airborne for several minutes (video below), though its creators, presumably fearing the flight may result in a mangled mess, stuck a dummy in the saddle instead of a living, breathing human being.

But they needn’t have worried, as the 220-pound bicycle’s test flight went without a hitch.

For the complete story and by Trevor Mogg
of Fox News, click here.