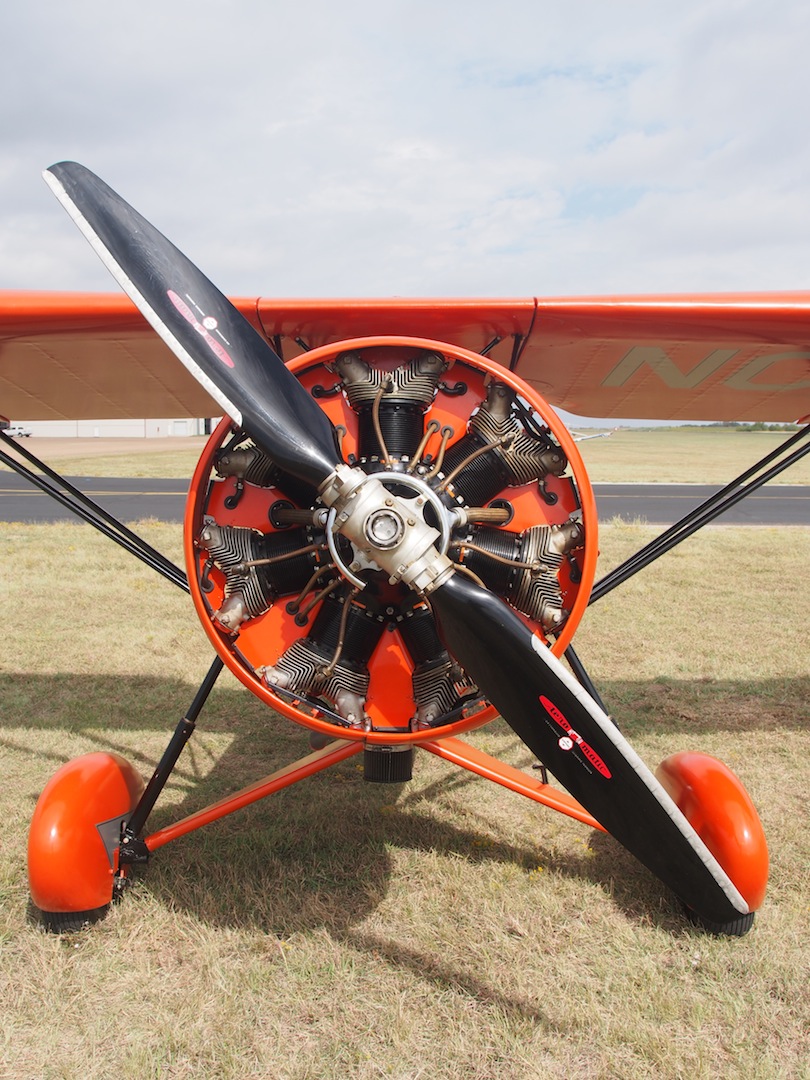 OK, I’ve got a confession to make: until Saturday, I’ve never been to a fly-in. Yep, I know what you’re thinking: how can any self-respecting plane buff wait so long to attend a fly-in? Well, I don’t know, but that’s irrelevant now, ’cause I’ve got one under my belt. When I got back home, I asked myself the same question: why did I wait so long?

I can’t answer that, but I can say these things are pretty cool. There’s plenty of food, plenty of friendly faces and plenty of planes…usually. See, Saturday was a gray and windy one in North Texas, so the scene at Gainesville Municipal Airport (GLE) wasn’t typical  of the fly-ins hosted by the Texas chapter of the Antique Airplane Association. With good weather, several hundred birds of all sorts can show up, I was told, but Saturday was not a bluebird kind of day. Since it was the chapter’s 50th anniversary, Mother Nature really disappointed.

Still, I had a blast at the group’s Fall Festival of Flight. The bold flyers who did make it brought some great aircraft. Off the top of my head, I saw a Travel Air 6000, a Davis D-1 (shown above), a variety of Cessna taildraggers (including an O-1A Bird Dog), some Pipers, a Luscombe, and a few Stearmans. Of course, there were more, but perhaps the most memorable to me was the Beechcraft T-34 Mentor whose owner, one of several who left early because of what was coming on the radar, gave the small crowd a sweet flyby before heading home!

It seemed liked the folks who stayed had a good time, too. Those who flew in did a lot of armchair flying with those who drove in (like me) inside the spacious Tomlinson Avionics hangar rented for the occasion. Breakfast and lunch was served, too, for a small price, and the $5 registration fee not only got you a chance to vote for your favorite plane but some nice swag.

The festival made for an eventful October for aviation fans in the area; just a week previously, the Fort Worth Alliance Air Show was held at Alliance Airport less than an hour away. The show featured not only the USAF Thunderbirds but the Canadian Forces Snowbirds, whose pilots and crew no doubt felt right at home in the chilly temperatures that forced attendees into jackets and under blankets.

Unfortunately for me, I was unable to make it to this year’s Alliance show, but I don’t regret it. The fly-in at GLE was just as cool and, in a couple of ways, even cooler. The pace was certainly slower and that gave me more time to peruse all the details of those old planes, such the manufacturer’s plate on the Warner Scarab-powered Davis or the handmade label that read “Don’t Do Nuthin Stoopid” on the panel of the Bird Dog.

So, the next time you hear about a fly-in, take some time to go; whether you fly there or drive, I’m sure you’ll enjoy the planes and the people. Plus, your registration dollars will go to making sure these kinds of events continue to happen in the future. By the way, if you know of any upcoming fly-ins, please send me a note at mikeh@airage.com and I’ll get the word out.

Here’s one that’s just around corner: the Copperstate Fly-In & Aviation Expo is set for Oct. 25-27 at Casa Grande Municipal (CGZ) halfway between Phoenix and Tucson. For more info, click here.