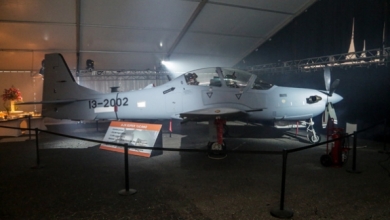 Sierra Nevada Corp. (SNC) and Embraer have delivered the first A-29 Super Tucano to the Air Force, with company officials pledging Embraer’s Jacksonville, Fla., facility will produce the remainder of its order on time.

The delivery was made Thursday at that facility. On hand were military officials from the U.S. and Afghanistan, including Maj. Gen. Abdul Wahab Wardak, commander of the Afghan Air Force, which will be the final customer for the light attack propeller planes.

Delivery of the A-29 marks the start of filling the Light Air Support (LAS) program contract for the Pentagon. While the plane is new for the U..S, there are over 200 Super Tucanos on order around the world, more than 170 of which have been delivered, according to Embraer figures.

For the complete story by Aaron Mehta of the Air Force Times, click here.